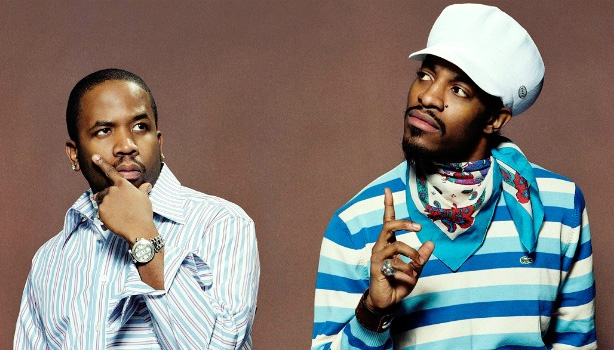 Wudduuupp friends?! Hope yall had a good break and Santa was good to you cause lord knows he treated us well. Can you pause that? Whatever. Anyways, we are back in the building and ready for a new semester. We haven’t been hitting too too many classes but we definitely cooked up a nice little show for yall this week.

If you are wondering why ATL’s finest duo is in the cover photo, well, let me explain. Outkast is coming back with a 40 festival reunion tour starting at Coachella. This means that yes, it is possible, we have just have another outkast album in the near future. What does this mean for hip-hop? More of that Andre and Antwon.

In other news, Mac Miller left Rostrum Records, Ciara and Future are having a kid, Juicy J selected his scholarship winner and Kanye could be going to jail for assault. Are you suprised?

Annnnd for all you suckas who didn’t catch it live, we had some very special guests helping us bring in the first show of 2014. You may know them as last year’s dynamic duo, the president and the HR manager, the bad gyals, A&E or whatever other names the claimed. We know ’em as Emily and Ali. They are the lovely ladies behind RadioLaurier’s longest running show; The A&E Show. Did I mention that they’re lovely?

REAL OR RATCHET this week was long overdue. We looked at some hip-hop culture trends we saw in 2013 that are up for debate. We asked A&E if we should keep them going or dead them asap. Some trends included rapping about social media, subliminal disses, RTing thirsty fans etc. Check out the full list right here and let us know what you think. A&E were undecided on a few.

THE REALNESS was kinda jokes…but also very, very real. Often times in hip-hop we see some ignorance. Rappers get their cheques after tours, merch or album releases and hit the mall. And when I say hit the mall I mean they HIT the mall. We all know rappers are notorious for spending money openly on outrageous things such as fur coats, cars, houses and, you guessed it, heaux. It’s almost a right of passage for rappers to buy as much ridiculous stuff as humanly possible. The last thing you would want from a rapper is money advice, right? Wrong. they may be few and far between BUT there is a few exceptions to the rule. We found a few lyrics that prove some rappers have smart, steady and educated spending habits. Check it out right here. Told yaaa so.

Our UNDERGROUND KING was Lincoln. We’ve got an interview with him coming soon. Just wait on it…

VERSE OF THE WEEK took it way back. You k now those verses that remind you of elementry school or high school or even last summer? Well, we do, and this week’s theme was Most Nostalgic Verse. This had to be a verse + story combo explaining how that verse made you feel backback in the day. Who was gunna judge? None other than A&E (they know a thing or two about nostalgia.. just ask them). I went with 50 Cent’s verse off Outta Control Remix and Kamo went with Kanye’s verse off All Falls Down. Who won? Kkkkkkkamo took this one handily. I think that makes us even for the year? No sweat, I got ’em next week. YOU KNOW ME!

Well, that’s it from us this week. If you weren’t able to tune in live, you can listen to our podcast below. Also, don’t forget to follow us on Twitter -> @RLRapUp