Hoping everyone has a fang-tastic and safe Halloween. Stay warm and remember to Trick or Treat yo’ self! Throw on your resting witch face and try not to get kissed by a vampire if you encounter one, I hear its a pain in the neck. You can’t skele-run from my skele-puns!

Joke of the Day

I would make a skeleton joke, but you wouldn’t find it very humerus. Keeping it Halloween themed, this week’s joke of the day is so funny, it has made witches fall right off their broom sticks.

Which ghost is the best dancer?

I saw some pretty boo-tiful Halloween costumes over the weekend. My three favourite individual costumes that I saw were: 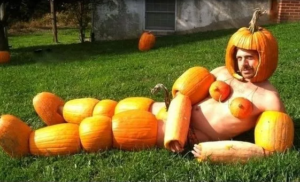 My three favourite couple costumes were:

The Toronto Maple Leafs started their California road trip last night taking on the San Jose Sharks, Patrick Marleau’s former team. There was a lovely video tribute for Marleau prior to the singing of the national anthems. Click here to watch the tribute. Toronto lost the game 3-2 with goals coming from Auston Matthews and Nazem Kadri. Click here to watch the highlights.

Once Halloween comes to an end, The countdown for Christmas (the greatest holiday) begins! Be sure to download Michael Buble’s Christmas album in preparation for the holly jolly season.