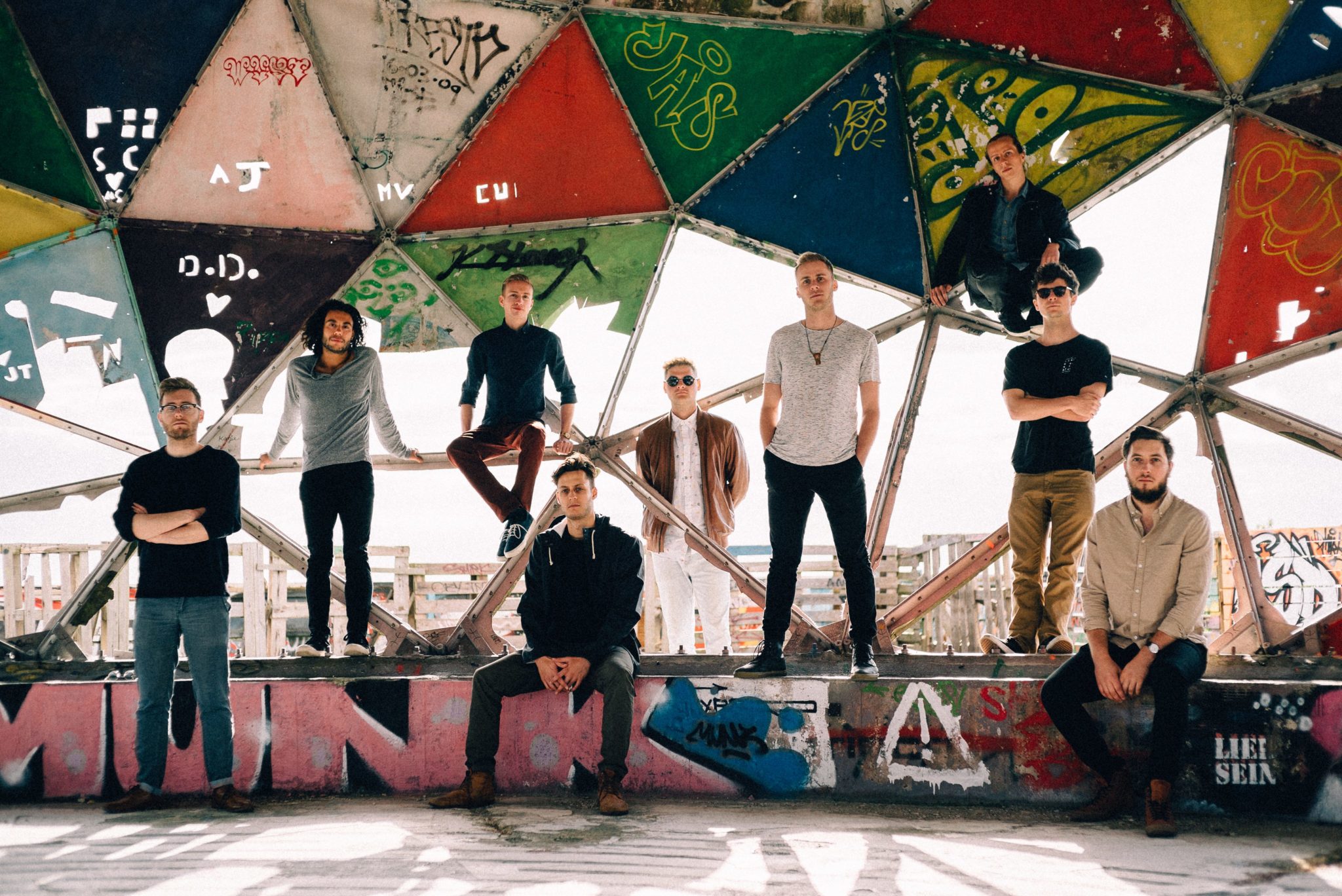 Last Saturday, an excited crowd of both young and old jazz fans gathered at Maxwell’s to see the Montreal-based group of 9, Busty and the Bass accompanied by the opener, Caye.

Caye – a Boston-based hip-hop/soul duo opened up the show with new music from an upcoming project they will be releasing in the New Year. Caye’s sound combined many different musical elements to create an upbeat vibe, with the highlight of a mini steel drum jam session mid-show.

Check out some of their music here!

Busty and the Bass’ massive setup consisted of 2 trumpets, a trombone, drums, electric guitar, bass, keyboard, synths, and a saxophone. Lead singer, Nick Ferraro delivered incredible energy, jumping from vocals to alto sax between songs, accompanied by Alistair Blu, who threw some rapping into the mix. Busty proved that jazz music is still alive and continuing to evolve, by updating traditional jazz techniques with hip-hop and electro-soul sounds. As a result, the crowd spent the night dancing and singing along to both new and old songs from the group.

About a week before the show, we had the chance to chat with Busty’s drummer, Julian Trivers about the band’s beginnings, creative process, and ongoing tour.

Radio Laurier: How did Busty and the Bass form?

Julian: We all went to school at McGill, and we all studied jazz music there. Our guitar player would invite people over to his house, where we would jam and play parties, and eventually, it turned into something more, developing into shows in Montreal, writing music of our own, and progressing from there. We’ve been together for six years now.

Radio Laurier: On September 8th we saw the release of your first full-length album, Uncommon Good. How would you describe the sound of this album compared to your previous work?

Julian: It’s definitley a more cohesive, more mature sound for us. We released three EPs before this proper album, and this was the first time where we sat down with a producer and thought about the whole project instead of individual songs. We worked with this producer named Neil Pogue, who’s done work with OutKast and Earth, Wind & Fire. He’s based in LA and came out to Montreal four or five times over a year and a half, and basically, we recorded a song or two, then he’d go back and sit on it and try to figure out what we could do. In terms of songwriting, this is a way more mature and sophisticated representation of what we’re trying to do. We’re trying to incorporate all of these different elements, and it’s kind of difficult when you have so many people in the band. I think this is the first time where we gathered all these influences and put it into something that works.

Radio Laurier: Your music has been described as a modern spin on jazz with hip-hop, electronic, and rock influences. Could you talk a bit about your relationship to jazz music?

Julian: Personally, I didn’t grow up listening to that much jazz, but we all studied jazz and later on in high school I started to realize the beauty in it. I’m probably the least into jazz out of the whole band, but I think it’s just the way that we approach jazz, combine it with different elements, take jazz aspects and bring it to pop, bring it to funk and put a different spin on it.

Julian: Personally, I would say that Kendrick Lamar is putting an awesome twist on jazz. We’ve been really into Taylor McFerrin recently, and I don’t know if you’ve heard of the band Moonchild, but they’re friggin awesome – kind of jazzy and hip-hop- we played a show with them in Amsterdam, and they’re absolutely amazing.

Radio Laurier: Many students at Laurier are pursuing a musical degree – with your background, what advice would you give students looking to break into the music industry?

Radio Laurier: You mentioned earlier that your band consists of a large number of musicians, and on this album, you’ve been starting to balance your creative visions. Is there a method for creating this uniform sound?

Julian: It’s definitely evolved over the years but I think our best work has come from when one person or a small group of people writing a skeleton song, and then bringing that to the full group to jam it out with all our instruments and try and make it even more developed and crazier than just your standard pop song or hip-hop song. I think where we excel is when we have your standard boards, melodies, and lyrics, and spice it up by adding an arrangement like a horn line or texture to the song that makes it stand on its own. The way that we translate our performance music the best is when we can incorporate live energy into the recording – do something that’s kind of surprising and not as conventional.

Radio Laurier: Your music takes on quite a unique style. Are there any countries overseas that have really embraced the sound of Busty and the Bass?

Julian: Germany has been really responsive – I don’t know if it’s our dance-geared stuff, but they love their electronic and energetic music so whenever we played our crazier stuff people were jumping around and having a good time. Berlin was definitely a highlight as well.

Radio Laurier: One last question…where does the name Busty and the Bass come from?

Julian: No one really knows where the name came from – we did this thing called frosh at McGill and someone wrote ‘busty’ on our guitar player’s shirt and he was always the one to have people over to play music at his house, so I think we just brainstormed from that. A couple people slept over at his house after one of these parties and it was written on a napkin, ‘Busty and the Bass’, but nobody knows who wrote it! 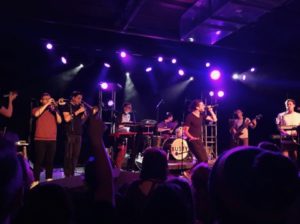 The band closed off the show with their hit single, ‘Dance with Someone’ followed by an encore performance featuring the talents of each instrumentalist. After the show, the band stuck around to hang out with the audience and catch up with their families. Busty’s new album, Uncommon Good is available on iTunes, Spotify, Apple Music, Google Play, Deezer, and Tidal here.