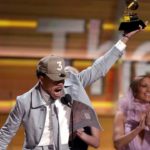 "They say you gotta sell it to snatch the Grammy" Well Chance, you proved them wrong. In case you missed this years Grammy celebrations, The Rap Up has you covered. Perhaps the biggest story of the night for the Hip-Hop community is that Chance the Rapper took home a total of three Grammy's for "Best New Artist", "Best Rap Album", and "Best Rap Performance". After a … END_OF_DOCUMENT_TOKEN_TO_BE_REPLACED