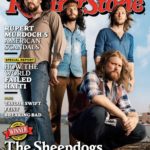 The main theme of the show this week was to showcase mainly Rock from Canada, but also included some rap. First was The Sheepdogs from Saskatoon, Saskatchewan. I played their songs Feeling Good and I Don't Know. Second was Said The Whale from Vancouver, British Columbia. I played their songs Loveless and Camilo. Third was The Arkells from Hamilton, Ontario. I played … END_OF_DOCUMENT_TOKEN_TO_BE_REPLACED