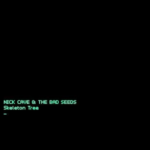 DJ Deej was in the studio for the very first show of the school year. She talked about the importance of the Arts and the importance of education in those disciplines. Nick Cave of Nick Cave and the Bad Seeds released a film to accompany the release of his latest album, Skeleton Tree. Cave not only used the film as a means of self-directed marketing for the film, but it was … END_OF_DOCUMENT_TOKEN_TO_BE_REPLACED