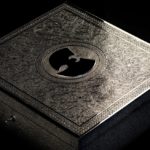 Wu-Tang’s Mystery Album Wu-tang has a new album but unfortunately you can’t hear it, not for 88 years at least. Unless of course you’re the private art collector who purchased the album package for a reported “millions” of dollars. The actual number hasn’t been released however the contents of the album package have. Along with a hand carved nickel-silver case, a … END_OF_DOCUMENT_TOKEN_TO_BE_REPLACED