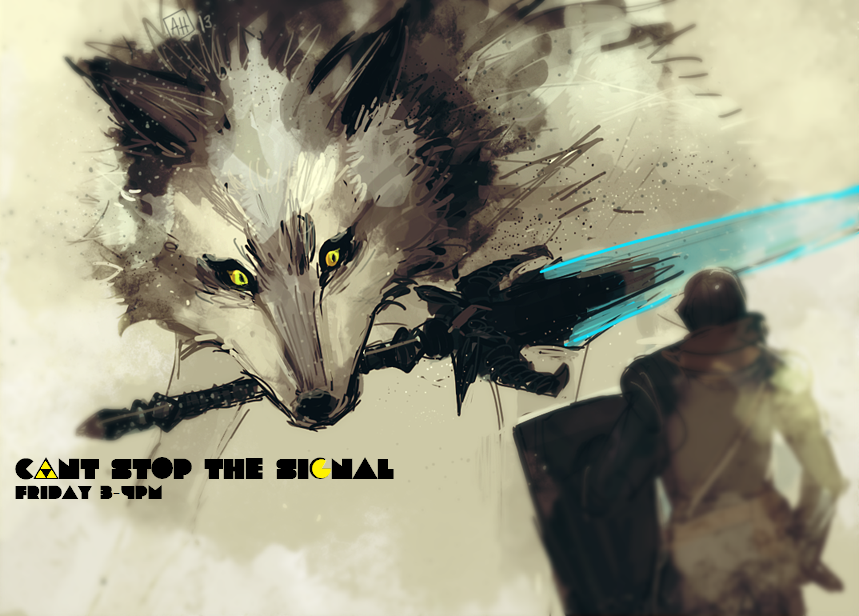 With the release of the new Dark Souls 2 trailer titled Curse, we were shown a hefty amount of new creatures and bosses we will be fighting in the game. Personally, this was quite refreshing as most of the other Dark Souls 2 trailers featured mainly humanoid opponents and the enemy designs of Dark Souls/ Demon’s Souls are some of my favorites. The trailer was nicely edited and allowed for a few quick glimpses of things and sections of their designs, but still left many details to the imagination. In honour of this we’ll be going through my top 10 creature designs from both Dark Souls and Demon’s Soul. Lets begin! 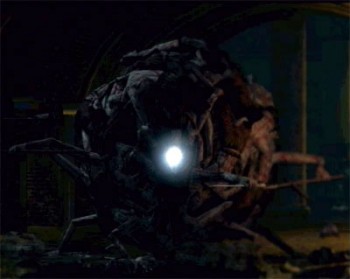 Located in The Tower of Latria, the Prisoner Horde gets on this list for a special reason, it is one of the only enemies I can think of from all of Demon’s Souls and Dark Souls I have never killed. Whenever you encounter him he is completely avoidable and he just honestly looked so frightening and not worth my time. Similar to the Mass of Souls from Dark Souls (it’s a mass of bodies), I find Prisoner Horde more frightening for the way it “walks” and swings its arms wildly. To top it all off, this thing fires a freaking Laser Beam (Soul Ray) at you from range! Sure…why not…..

Besides often being quite a nuisance, the Fat Official is overall a pretty creepy enemy. Though it has fire attacks for range and usually a giant axe for close quarters, what really make this demon terrifying is it’s off putting laugh and weird fashion sense. This character managed to merit some fan response as, though this character is not included in Dark Souls, players have made builds that aim to replicate this enemy’s aesthetic style and move set. 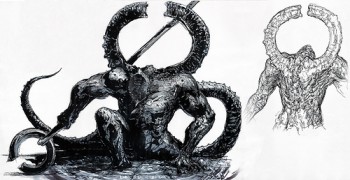 These guys are a personal favorite of mine and are a horrible and frightening opponent for many reasons. The first is the fact that they are a moving statue, both tenacious and frightening by design. The right leg being in front like that and the fact the head is cut off are very weird, and the way it can move so fast and leap so high really catch you off guard considering it is a statue. If you try and flee from the titanite demon or gain some distance they’ll hurl punishing lighning bolts that can do some serious damage. The second part that makes these enemies so wretched is the fact you always seem to have to fight them in the most inconvenient places, whether it be in a small room or corridor, or somewhere with horrible footing. 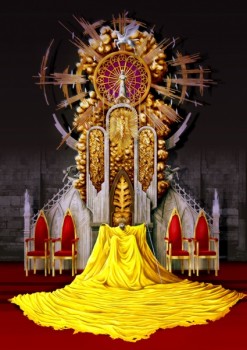 The Boss of The Tower of Latria, this enemy makes the list for a variety of reasons, most notably it’s unique pvp aspect. Instead of fighting the decrepid Monk character, players are pitted against a Black phantom – another player summoned specifically to beat the crap out of you. The overall design of the room is very cool, with a cathedral setting and hundreds of ominously piled up chairs. The Old Monk himself is interesting as it isn’t 100% certain whether or not the boss is actually a demonic cloth which possessed the Old Monk or if he imbued his own will into the cloth. Regardless, the fight is very unique in that it is actually with a summoned player though buffed through wearing the demonic cloth on their head in a rather bizarre fashion. 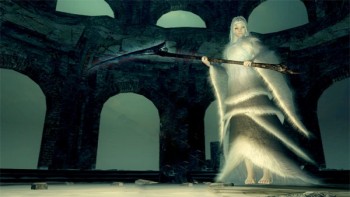 The half dragon daughter of Seeth the Scaleless, found in the Painted World of Armiamis. Priscilla makes the list because, while Darks Souls and Demon’s Souls are full of so many horrible and grotesque creatures, she is quite easy on the eyes. Most certainly remembered by many as being the only visually attractive enemy from any of the games, she will not attack you unless you assail her first. The fact she has a scythe certainly make her memorable for me and the ability to turn invisible is a neat mechanic. I also really enjoy the dreamlike snowy atmosphere of her home, the Painted World. 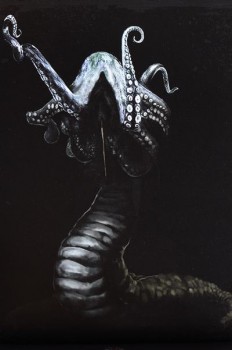 Created by the torturous experiments of Seeth the Scaleless, the Pisacas are a horrible snake, octopus combination with a deadly piercing attack. The fight with these things is made more frightening by the freaky music used to rouse them and the fact they are transformed from beautiful women is definitely messed up. The most creepy part is that at the end of the fight, there are two left in the back of their cage that simply weep and don’t bother attacking you…wow… 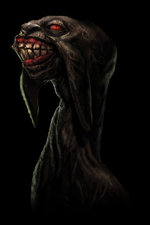 This might be considered cheating the top ten since you can’t actually combat with any in the game, but they may be considered your enemy depending how you view the lore – and those designs and freaky as hell! They’re strangely sleek and have weird moustache flappy jowels, and what the heck is with that giant toothy grin? To top it all off, the most interaction you have with these things is being eaten and spit out by them as a form of transportation…lovely… 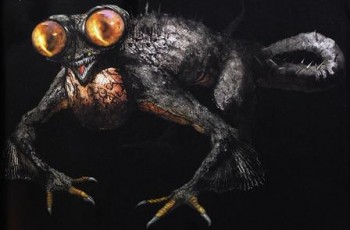 These guys have to make the list, for both their crazy design and ability to make players scramble wildly. With their primary attack being a thick black smoke that causes curses, it is a difficult hit box to figure out yet paramount to dodge at the same time due to how inconvenient being cursed is. Players who linger too long in the curse clouds will be instantly killed and frozen in jagged stone, with their corpses appearing as statues in the games of other players. It is interesting to note that the freaky bobbling eyes the Basilisk exhibit are in fact an intimidation technique – it’s actual eyes are actually quite small and located directly above the mouth. Never the less, this enemy is certainly effective in defeating new players. 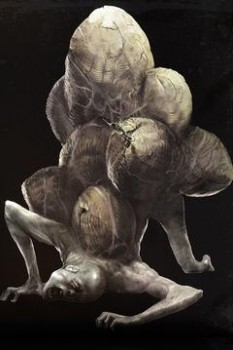 The Egg Carrier is definitely a unique enemy, as it doesn’t actually attack you unless provoked. These creatures are pitiful worshippers of Quelaag, infected humans, sprawled out on the ground, unable to stand due to massive egg sacks growing from their backs. What makes these enemies truly frightening is when you decide for the first time it would be a good idea to take advantage of their docile nature and attack….wrong. Upon death 5 white worms are spawned which leap ferociously when close to the player, causing the player to be afflicted with poison. Attacking these carriers is definitely a mistake a player isn’t likely to make a second time. 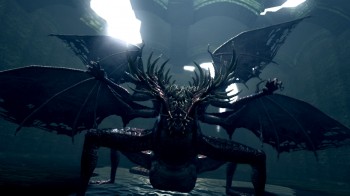 Though the fight is quite easy, Gaping Dragon has one of the most terrifyingly awesome boss designs. What initially appears to be a small crocodilian head reveals and endless array of teeth in a giant horrendous mass and shape. This fight can only really prove difficult if the caster that assists it is not killed beforehand, as he improves all the bosses abilities and pelts the player with missile attacks. The Gaping Dragon also has a particularly dangerous short range grab, where-in he thrusts the player into the gaping mass of fangs that make up his body, chewing him up and dealing a huge amount of damage. Certainly one of the most iconic and memorable designs from all of Dark and Demon’s Souls. 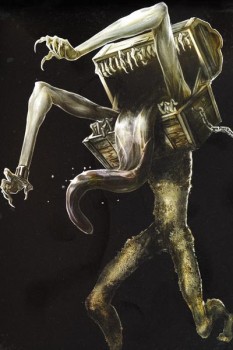 This may seem like an unoriginal or obvious choice for number 1, but c’mon! Has anything ever really beat that first time you were eaten by a Mimic? On top of that, when you go back for round two after you’ve figured out to attack it instead of looting it, you are in for surprise number 2 when it sprouts arms, then legs, and grows to a towering height to kick the life out of you. Mimics are also great because they are such a timeless fantasy and RPG enemy yet they are given such a dark and grotesque turn – never have I seen one walk like that or have fingers for teeth! The player can eventually wear a mimic as a head piece called the Symbol of Avarice, it drops randomly or off the final Mimic if you kill all others in the game. The Symbol of Avarice gives the player better drop chances on rare items, while punishing the player with a slow but constant health drain.