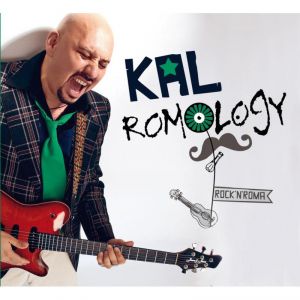 Tragedy and comedy are inseparable. The Roma people of Serbia have endured unspeakable tragedy, possibly why Romology, the latest album from the country’s most famous band, KAL is brimming with wry wit. The playful cover captures guitarist/founder Dragan Ristic in full ‘Rock n’ Roma’ mode, fretting his electric in decidedly non-rock loud plaid and bright green tie. But, the punch lines on this record are often sobering and reflective. Ristic takes his Romology very seriously. Kal prides itself in promoting Roma heritage and identity, challenging still-prevalent prejudice. When he’s not kicking out the Balkan rock, Middle Eastern grooves and even splashes of tango, Ristic teaches at the Amala Summer School in Serbia, an educational program he co-founded that connects Serbians with the Romany language, history and culture, promoting positive affirmation of Roma identity. His work undoubtedly spills over into his compositions. Romology is filled with fascinating asides and explanations of the tunes themselves. Among my favorites is ‘Gadzo DJ’. The track has an infectious urban bounce, replete with turntable scratching alongside the Balkan brass. The album liner explains, “A ‘gadzo’ is everyone who is not part of the Romany population a new ‘caste’ appeared, who are DJing Romany beats and music. We (KAL) are making fun of their ‘understanding’ of Romany music, because in some cases it is a little inappropriate, that they are making a business out of Romany music.” A few songs earlier on the album, the band present ‘Negro’, “comical protest against racial discrimination. Calling Mano Negro, a band, Dragan’s childhood idols.” It’s a tip of the hat to Manu Chao’s pioneering group of woldbeaters, again with a serious undercurrent that would make less scholarly bands wince. Romology is foremost a party record, but it’s nice to be able to choose to just get your feet wet or submerse yourself in its deeper lessons.