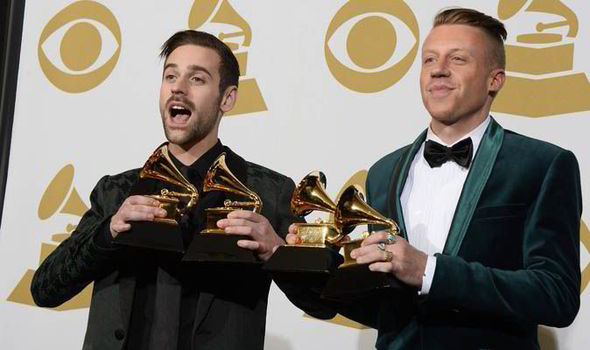 Wuddduuppp yall?! We apologize for all the constant delays and missed shows but we gotta spread the air time around fairly and lately Laurier athletics have been… BALLIN’! Word to Jimmy Jones. Ha!

But on the real, we had Brantford back in the building and boy did they roll deep. We had Dj Dub, MP3 and Ian come thru and let us know what’s good in the good ol’ B-Ford. We played a little bit of that Martin Pitt (Brantford’s finest) and it was featuring non other than the big homie Dj Dub. The track is called ‘We On’ and yall can check out real soon on this very blog soooo stay tuned.

In other news, Lil Boosie is coming home soon, Macklemore has 4 more Grammys than Nas and Eminem is starting a battle rap reality show.

Even though Brantford was in total control of our show (of course) I still got a chance to sneak in a little GLAYSHS GUILTY PLEASURE. This time I had to take it to Chicago. Well, to the streets of Chicago that is. I broke yall off with some ‘For The Low’ by Lil Bibby. Warning: after listening to this song, you may want to start doing illegal activities. You’ve been warned.

Due to the fact that we were playing straight bangers all night, we didn’t get to hit our usual segemenst. However, we were still able to talk about this whole Grammy nonsense. Soooo either you’ve been living under a rock for the past year or you are well aware of Mr. Macklemore and his super producer/friend/DJ/hair stylist Ryan Lewis. Both these cats came out of Seattle with a bang…literally. Their debut album, ‘The Heist’ was a major commercial success and their singles (Thrift Shop, White Walls, Same Love & Can’t Hold Us) were radio smashes. ON THE OTHER HAND, there was this little guy from Compton named Kendrick Lamar who put out that one album called ‘good kid, mAAd city’ back in October of 2012. Safe to say this album was one of the greatest things to happen to the culture in years. If Kendrick’s album came out in 2012 and Macklemore’s came out in 2013, they would definitely be in different Grammy years, right? WRONG.

The 2013 Grammy award had both Kendrick’s album and Macklemore’s up for ‘Best Rap Album Of The Year’. Who won? You guessed it… Mr. Macklemore. Shouts out to Mack buuuuut Kendrick’s album was considered one of the greatest and most well put together projects in years. There will never be another one like it in quite some time. But hey, Nas doesn’t have a Grammy either…

Anyways, enough raving and ranting. Check out our podcast below to get everything you missed and make sure to follow us on Twitter —-> @RLRapUp