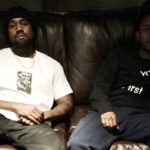 Kanye Makes Moves Yeezy seems to making major moves in the music industry as of lately. Kanye’s wife, Kim Kardashian, announced that the enigmatic rapper would be dropping a new song every Friday and so far he has done exactly that with the releases of "No More Parties in LA" and "Real Friends". Another huge revelation was the release of Kanye’s highly anticipated album, … END_OF_DOCUMENT_TOKEN_TO_BE_REPLACED