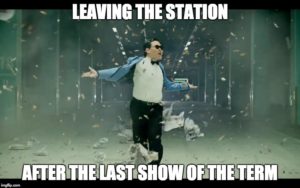 Last show of the term, of the year, it’s almost finals and I legit left the station just like the picture above, no joke. What an amazing term it’s been, let me start this blog by thanking all you beautiful people that have been tuning every single week to the show- it’s been an absolute blast bringing you the best throwbacks, talking about some great events happening around campus, and sharing whacky articles every single week. I carried on playing some amazing throwbacks such as Ice Ice Baby, Genie in a Bottle, Stacy’s Mom, Boom Boom Pow, London Bridge, and many others! That said, this week’s show was a little different in the sense that we started with an interview before the throwbacks, just to mix things up. I had Rachel Hunter in the studio, one of the dance instructors here at Laurier. We had a great chat and she talked a little bit about herself, how she got into dance, the dance program here at Laurier, and the big showcase this Sunday. Here are some excerpts of our conversation: 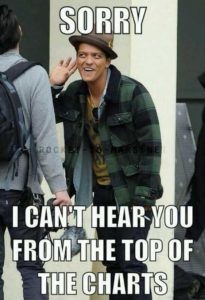 After the interview, it was time to talk about a fun article that I read- thought I’d dive a little deeper into last week’s AMAs and how Bruno Mars KILLED. IT. Winning 7/8 nominations, there was only one category he didn’t win, that’s where our Canadian Boy Shawn Mendes won- the category of Best Male Artist: Adult/Contemporary. I did play a couple of Mars‘ songs as well, like The Lazy Song. If you were tuned in, you probably heard me rage about how the song itself was not even close to lazy- it was all done in one take and the different dance moves and the whole song being memorized were just the starting points of how awesome it was. He clearly puts in a lot of work into not just his vocals, but the music videos as well: not surprised at all that so many of them have over a BILLION views on YouTube. Remember that time when Gangnam Style hit 1 billion and we all lost our collective minds? Yeah well like 50 other videos have done that now #FeelOldMoment.

After that, I slowly moved into current music with hits such as Black Widow, Fancy, What Do You Mean, and Pillowtalk. It really was an upbeat end to a great term. Till next time, which will incidentally be in January, OF 2018 *let that sink in for a sec* the message is as follows: ALWAYS be thankful for what you have- don’t feel bad about what you don’t have and be thankful for, and content with what you do have. That said, thank you once again for a great term I hope to see you guys back next term, tuning in just the way you have been  over the last 3 months. Once final word, I’ll be taking over the Radio Laurier snapchat on next Wednesday the 6th! So y’all get to creep me on the last day of classes, what a way to end the term eh?

I’ll see you guys next year, remember to go out and support our Golden Hawks at the Dance Showcase this Sunday taking place the AC! You might even see me there as well! Good luck to you all for final exams, hope you kill it!

DJ Thr0wB@ck out for the year.