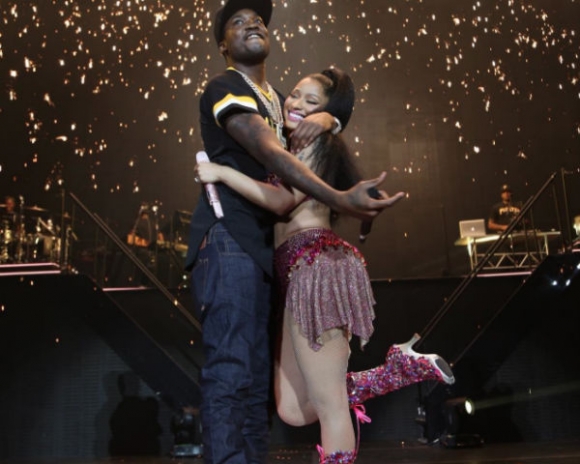 Nicki & Meek sitting in a tree

Usually when we speak on Meek Mill, it’s because of his feuds with other rappers, however it’s pleasing this time around to hear Meek is taking some time from his twitter fingers to focus on his future. While it wasn’t exactly from the philly rapper’s mouth, his girlfriend and Hip-Hops baddest female MC, Nicki Minaj gave everyone an update on the couple’s situation. If you follow Nicki on any social media you’re probably aware that Meek has promised Nicki with 3 rings and so far has given her two. According to Nicki, it’s not official to her until that third ring finds a finger and also not the only milestone she hopes to reach in life within the near future.After the wedding, assuming things go to plan, Nicki revealed plans on entering motherhood and her excitement at the thought of holding her own child. While the rest us wait on wedding bells, Meek looks to resume recording music however that can’t happen without a judges approval, and its looking theres a lot of “waiting” to be done with these two.

Much like Dr. Frankenstein’s monster, The Life of Pablo is bigger than life, misunderstood and ALIVE. Yes, according to Kanye West T.L.O.P is a living breathing artistic expression that he plans to keep on updating. Recently Kanye edited “Wolves” back to its original version featuring Vic Mensa and Sia while also keeping Frank Ocean’s 30sec verse on the tail end (THANK GOD…or kanye?). As far as albums go, no other artists has or is attempting to utilize a music streaming medium to enhance, develop and keep fans coming back… Assuming you’re messing with the album, it’s sort of like your favourite painting, touching itself up from time to time. It seems with each passing week Kanye Fans are still excited about the possibility of something else arriving… We just aren’t quite sure if itll be a new Yeezy Bosst colour scheme, epic twitter rant, album, or another version of “Wolves”.

This is It – Flatbush Zombies

WHAT THE FUCK RIGHT NOW- Tyler, the creator