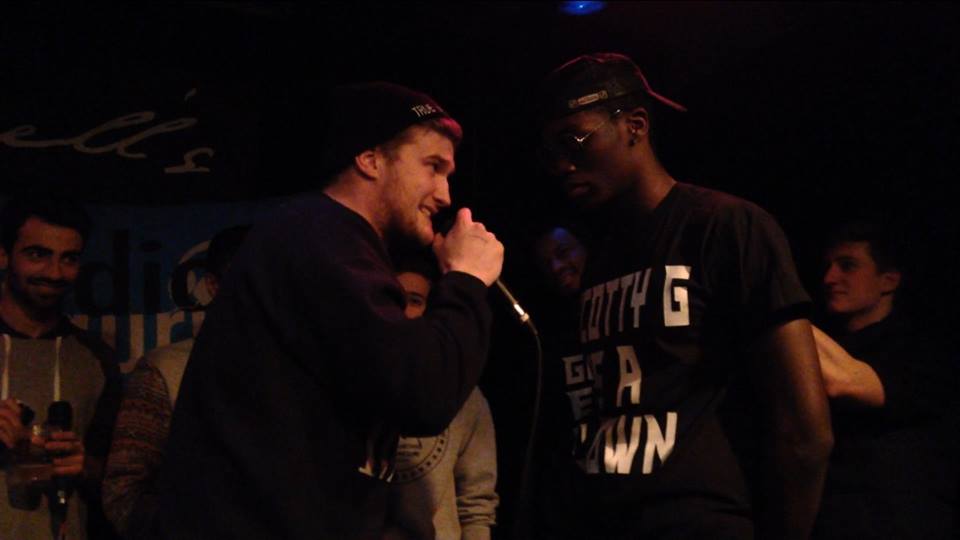 Wuddduuuppp yall? Hope school isn’t bogging you down because we are on another level! This past week we had our SECOND ANNUAL HIP-HOP HANGOUT at Maxwell’s Music House here in Waterloo. Even though we hit capacity at 9:30pm, we still managed to have a hip-hop heavy time. In case you weren’t there for some extremely strange reason, let us recap what went down.

For starters, we had an amazingly dope playlist made up by Brendan ‘Twig’ MacDonald. It included bangers, smooth tracks and bar-heavy tracks from all of your favorite rappers. In other words, the place was jumpin’ jumpin’!

Our first performer was KW’s finest, Kori Vision. Kori ran through all of his latest tracks including Cloudwalk, Homies and of course everyones favorite Doin Bad. He was on for just over 20 minutes and got the packed crowd fired up for the rest of the night. If you weren’t able to check him out, peep his latest track below and keep a lookout for him in future community events.

After that we had our first battle of the night. It was a two way bout between Laurier’s very own Rohan Raj and UW’s Jessie Medeiros. Each rapper was given three 90 second rounds to totally humiliate the other. To make things even more interesting, both emcees put up $100; winner take all. After a ton of bars and bruises, Rohan came out on top and is now $100 richer. Winner, gagnant.

Up next we had a dope set from Ramsay Almighty. Ramsay gave the people exactly what they wanted; that classic KW sound. He ran thru all of his hits off ‘Metropolis’. Highlights? Definitely the second “turn up” half. Check out some of the best bangers below.

Up next we had our main act, theO. Short for ‘the highly enlightened one’, theO kicked things off with a few new cuts off his upcoming project entitled ‘Something Like This, But Not This’. The tracks were visibly giving people in the crowd goosebumps. For real. He brought it back to some more familiar tracks that the audience really rocked to. Check out some real show stoppers below and be on the lookout for more from TNC’s frontman.

AFTER ALL DAT, it was final battle time. ScottyG vs. Tech Rymes. This was what everyone was waiting on. Both rappers had been hyping this one up for a while and, boy, was it ever worth the wait. After three 90 second rounds, the judges still couldn’t find a winner. Ipso facto, both rapper were granted a 60 second freestyle round. Le winner? Tech Rymes! Until next year friends, until next year…

Anyways, we want to give a major shout out to everyone who came out and supported, yall mean the world to us.