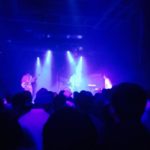 BADBADNOTGOOD and Ghostface Killah did an insane job at Mezzanine Club in San Francisco, California. They released their collaborative album, Sour Soul, in February of this year, and it's been a hit amongst Modern Jazz and Hip-Hop fans alike. Ghostface Killah, a member of rap group Wu-Tang Clan, dropped some classics from the group's era, as well as from his solo rap albums. … END_OF_DOCUMENT_TOKEN_TO_BE_REPLACED