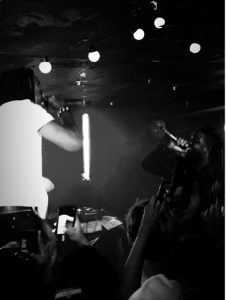 “This is one of the smaller venues we’ve done, but ya’ll in Waterloo are f*****g wild!” – 88 Camino 30 minutes until the concert. The atmosphere in White Rabbit was great. It was quiet, relaxed, the lighting was a bit dark and there is some faint music playing in the back. We’ve had a couple of drinks.

25 minutes until the concert. The door of White Rabbit suddenly swung wide open and the mood changed. A group of 8 or so walked in, and two of them instantly stood out. The one who was leading the group was wearing a custom XO x BAPE hoodie, and the other, who had an intimidatingly large stature and multiple chains on, came in last. The leader of the group quietly asked if they could get some drinks with privacy. When they realized that wasn’t possible, they quickly left and got into a limo on the sidewalk. We were the only ones that recognized that they were Derek Wise and 88 Camino and this was the start of our 88 Glam experience.

After a surprisingly thorough pat down, we walked into the Starlight Social Club, and it was already packed from wall to wall. The energy of the crowd was overflowing, the dance floor was getting filled even though no music was playing yet. Soon after, the DJ began spinning a few notable rap tracks, as we eagerly waited for the arrival of 88Glam. And we WAITED, yet all was forgiven the moment 88 Camino and Derek Wise walked onto the stage.

88 Camino and Derek Wise began suddenly, dressed in designer clothes and chains, the duo immediately captured the audience’s attention. They started with their hit record, Lil Boat, off of their newest album, 88Glam2. This fast-paced, high energy song introduced the audience to the smooth auto-tuned voice of 88 Camino and the deep baritone voice of Derek Wise, which complemented each other perfectly.  Throughout the show, 88 Camino’s down to earth personality engaged and captivated the audience. This was especially notable when he came to the edge of the stage, crouched down and slowly sang his lyrics during ENDZ. We felt completely entranced at that moment and the small venue set up of the Starlight stage worked to make the audiences experience much more intimate. 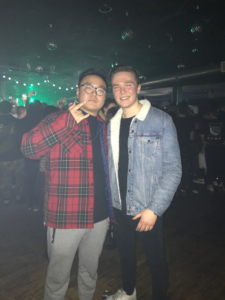 88Glam’s diverse musical talents were on full display, as 88 Camino was able to sooth the audience with freestyle melodies while Derek Wise hyped the crowd up with his hard flow. A lot of audience interaction proved to make the show ecstatic as they conducted mosh pits during their songs and while playing Bali, handed out water bottles and instructed fans to throw them in the air during the chorus. This caused mayhem as the crowd erupted with water, while Wise said, “This some Niagra Falls s**t!” Moments like this made the show memorable and extremely enjoyable as everyone in the crowd was completely engaged in the on-stage antics.

One fan described the performance as, “extremely hard to sum up, but seeing them live, was like one of the most enthusiastic, surreal, pimping experiences of my life.” A product of the Toronto rap scene, signed by XO, worked with artists like NAV. This is what most people, including ourselves, thought of 88Glam, but if you take a closer look, you can see that this talented duo is much more than that. Their popularity has grown tremendously and their sound has evolved since their debut album, 88Glam, with their hit record Bali accumulating over 35 million streams on Spotify certifying it as platinum.

88 Camino and Derek Wise will soon be making headlines. Their skeletal production is always on the money, with a distinct smoothness that encompass their contrasting voices perfectly. We had a great time at this show and were extremely impressed with their live performances. As far as Toronto rappers, we think 88Glam is definitely among the hottest out right now. After opening our eyes into the world of Toronto rap, it will be interesting comparing our thoughts of 88Glam to artists such as Pressa and Anders, who we will also be reviewing.

“I never do encores, but … I’ll do one just for you Laurier!” – Anders Anders dashed onto the stage after a long silent pause. In the same motion, he began with singing Diamonds. His presence shifted a tense atmosphere into one that seemed much more comfortable and relaxed. At this moment, he had already gained the crowds full attention.

With the crowd fully captivated, their tension was not released by screaming or cheering, it seemed his music was what lifted everyone’s spirit. After the song was finished, he gave a shout out to his crew for helping him achieve a 2019 Juno nomination for the R&B/Soul Recording of the Year category. He then reignited the crowd by coming up close and standing on top of the barrier that separated them. He was quickly followed by two startled security guards, who were obviously not anticipating this close interaction, even we had to make room for him.

Throughout the entire show, it was clear Anders was focused entirely on his audience. By telling the crowd to “make some noise for yourself” and reaching out to his fans, his down to earth personality provided many intimate moments. 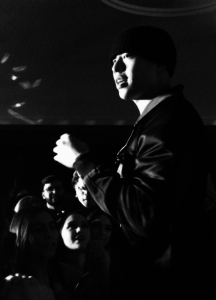 The show ran smoothly, despite some technical difficulties. Disconnections with the microphone proved to be a problem but Anders did not let it affect his performance as he paid it little attention. “This microphone is pissing me off but we’ll get it going for you guys”. His ability to remain positive kept the atmosphere from shifting and he was able to continue to liven the audience. Then a magical moment happened.

During the song Rain, the audience turned on their phone flashlights in unison with Anders instruction. This created a spectacle that fit well with the song. The song Rain, featured on his album Twos, is one of our favourites and it’s honest and heartfelt sound matched the vibe of the concert perfectly. Anders showed his versatility when he performed his faster paced, hit single, Love No More. This performance changed the mood completely and got the crowd on their feet, dancing and singing with him. It was clear at this moment that Anders was very successful at getting the reactions he wanted from his crowd.

With the concert coming to an end, Anders was ready to make his leave as he thanked the crowd for being amazing. This is when the crowd started chanting and asking for one more song. Surprisingly, after a few seconds of hesitation, he said “I never do encores, but … I’ll do one just for you Laurier!” With this, came an uproar of applause as he prepared his next track. This was the most emotional performance he did during the concert. He ended singing the song, Changes. This emotional, slow-paced song was performed with extreme passion, and the crowd felt it.

Directly after his encore performance, Anders told the crowd that he would conduct a meet and greet. We were fortunate enough to get the chance to briefly speak to him and get a picture. As we approached him and told him we were big fans, he was very welcoming and charismatic. What amazed us is that even though he just finished a long performance he was still willing to make time for all of his fans. It seemed like he genuinely cared about what they had to say. We enquired about the opportunity to interview him but were informed that he doesn’t take press. This gave us insight on his character and shows that he cares more about his fans than he does about media.

What we found to be very interesting is how different he is than the last artists we reviewed, 88Glam. All three artists emerged from the Toronto rap scene and have gone on to become very successful. What separates Anders is his authenticity. It seems to us that he doesn’t care much for the fame and is more so true to himself. This is clear from the fact that he refuses press and hardly exposes himself to the public. One of his lines from Rain reads; “I don’t want the attention, Nah, that just ain’t my type.” This lyric gives a great outline of who he is as a person. Throughout the money and fame, Anders has maintained his personality and he is destined for more success.

Stay posted for more of our content covering all your favourite music,

For any suggestions please reach out to us!
joshuayyw@gmail.com
241adam@gmail.com