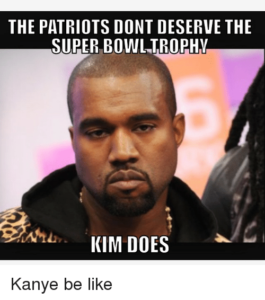 Hello once again people! Am I the only one that couldn’t catch the Superbowl? Probably the first year in so long that I couldn’t *sob*. In my defence, I was studying really hard like a good kid and didn’t have the time to watch an ad-laden Super Bowl. I did follow the score though, and I actually as a joke talked to a friend of mine right before about how literally everyone I knew was going for the Patriots so just to bother them, I was going for an Eagles win and hey look I/The Eagles won 41-33. Hey see, even Kanye didn’t want the Patriots to win! 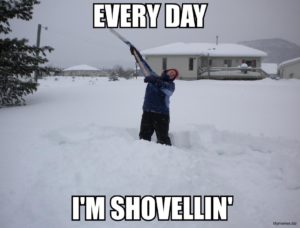 I honestly feel like a graphic I used last week just works so well again. The amount of snow is kinda starting to bother me to be honest. Literally every single morning we have another couple cm of snow to walk through and deal with. The Laurier plague has finally settled a little- the weather is thankfully not as back and forth as it had been over the last several weeks: it’s just consistently brutally cold now. Great. With some great segments, a lot of laughs (I crack myself up, #SorryNotSorry), and with some amazing music from 50 Cent, to Drake, I tried my very best to have the show almost make up for the miserable weather outside.

After my Billboard Top 10 update, one of the segments I introduced that I’ll do every now and again are some odd gainers on the charts. In this segment I’ll periodically talk about whether there were any songs that gained popularity even though most people may not have expected them to do so (with the reasons being: been on the charts for a very long time, never heard on the radio, etc.) This week, Never Be The Same by Camilla Cabello went up from #37-#30 although it already had peaked at #32, will it continue its rise? Let’s see. 1-800-273-8255 by Logic, Alessia Cara, and DJ Khalid went from #46-#33! That was a huge gain, especially considering the fact that the song had a good run in the Top 10 and has been on the charts for 40 weeks now. Finally, Shape of You by Ed Sheeran– although it maintained its spot, the fact that it went up last week and is still at #22 on the charts having come out in JANUARY 2017 is something worthy of praise *Cue totally real PowerPoint applause sound*. I did also read some very funny Spotted Tweets that I found, including the interesting story of the guy with the Herschel backpack and how he’s become a meme: I’m totally rooting for him to have an awesome comeback to all this. I believe in him.

So I did introduce a new segment last week where I debunk some common myths- generally stuff most people believe. Here are the myths that were debunked this week:

And that, along with a funny weird Wednesday article was it for today. Thank you all for tuning in- I’m so so glad I brought back all the segments back; definitely makes for a fun show. That said, thanks again, I’ll catch you guys all again next week for our last show before reading week! To all those having midterms, all the very best, do not settle for an L! I hope today’s show helped maybe make the walk to class a little less crazy. Remember to follow us on Facebook, Twitter, and Instagram @RLMorningShow. Take care, stay classy, DJ Throwback Out.