Anyway what an exciting show, talked about the death of Mark E. Smith of The Fall which is very sad, I’ll defiantly give him some more listens. Hopefully we don’t have a repeat of 2018 where every musician ever died.

I also got really excited because King Krule is finally coming to North America so I might see if I can check that out!

I’m also really liking the re-recordings of the car seat headrest songs for Twin Fantasy, go check them out if you haven’t. We also have Julian Casablancas coming back with the Voidz, not the strokes but hey might still be great.

Also discussed how Jack White has banned phones from his shows saying that “We think you’ll enjoy looking up from your gadgets for a little while and experience music and our shared love of it IN PERSON.” and I’m totally with him, you’re there for the music, not to tell other you’re their, if I go to a concert I usually take like 1 pic and that’s good enough for me.

Also got some funny texts from friends who listen in who had no idea what noise rock was. It’s a bit much the first time I understand guys don’t worry.

Anyway here’s the setlist (and a meme)

Something Against You – Pixies 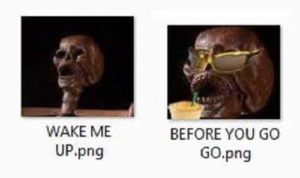