♥GOODBYE FOR NOW FROM THE LITTEST TEAM ON RADIO LAURIER ♥ 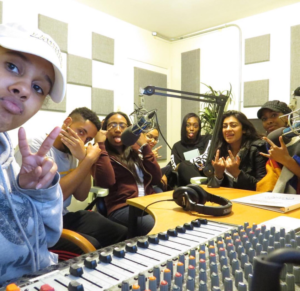 As the semester comes to an end, there is a bittersweet feeling that is beginning to overwhelm all of us. The stress of exams is kicking in and everyone is preparing for their much-needed break from the long hours of studying, essay writing, lab reports and readings. The one thing that I am not looking forward too is the few weeks where the Basement won’t be airing. Sundays are the days that we all look forward too as the de-stressor at the end of the week and a refreshing start to the new week. So, it is with deep dissatisfaction that we have to say goodbye for now as the fall term comes to an end.

The show started with the team letting our audience know what they had planned over the break. Catching up on sleep and boxing day shopping seem to be top priority on the list. Trust me, I FEEL y’all on a spiritual level. Always remember to catch your Zs and secure the bag; its called LIVIN YOUR BEST LIFE! We then asked our audience a question: Is there such thing as a selfless act? And we have yet to come to one solidified answer to this question. We can all just agree to disagree! After our first Christmas themed music break, our team got onto the topic of buying gifts for others. We asked when is it an appropriate time to buy your significant other a gift? friends? Are there risks and limitations to this? Our very outspoken team had a lot to say about why they felt this ambiguous act could affect their relationships in both positive and negative ways.

Our second Christmas theme music break eased our audience into the heavy hitting topic of food insecurity in Canada. Did you know that in Canada 12.7% of Canadian households are affected by food insecurity? This doesn’t sound like much in comparison to other countries with a much higher percentage but given the total population of Canada which is upward of 35 million, there is about 4 million of those people who have to deal with this issue (1.5 of that being children). We discussed Food Banks as a band-aid solution to this unspoken issue and how they cannot sustain the amount of people that rely on them monthly. Each month, over 850,000 people turn to food banks for help (Canadian Community Health Survey, 2012). Canada’s national food insecurity is underreported, lacking researched, nuanced crisis reaching its tipping point. Just something to think about during the holidays and those moments you catch yourself wasting food that a lot of people in our own community do not have access too 😊.  We ended this heavy topic with some end of term giveaways. Shout out to our two winners for always being actively engaged in the show; We appreciate you!

During our music break the team started preparing for the end of year cyphers. We have been just as excited as our audience to hear the verses that the crew had to lay out. Caleb with the sickest flow, Lydia and Nadia with the realness, Mariam with the creativity, Abdul with uniqueness, Ocean with the bars, and Bri Blake with the heat. You’ll have to stay tuned next semester to hear our director, Taia, when she ends off the year with her very own original verse. One thing we know for sure is that we left our audience in shock with the realness coming from the team! Pat yourselves on the back lovelies, shout-out to y’all. We gave our final shout outs and songs of the week to close off our show. We want to say thank you to everyone that has made the Basement such a success over the past few weeks. We appreciate all of the feedback and positive energy that we have been receiving and we are working hard to continue to bring y’all a great show. Stay tuned for updates on our shows next semester! Always remember, stay real folks!