This week on the inaugural show of Sports Management Laurier’s The Sidelines podcast, Evan, Liam, and Hayley start of the show with the mention of Italy missing the World Cup for the first time in 60 years (why it doesn’t matter that the US isn’t going either), college football upsets (why some conferences are better than others), Rookie of the Year award winners, and baseball management.

In the world of basketball, we mentioned the Celtics 12-game win streak, UCLA basketball’s travel troubles (not inside the game), NBA players either making or breaking a name for themselves (that means you Lonzo Ball, and also you Giannis whose last name we are not even going to try to pronounce). 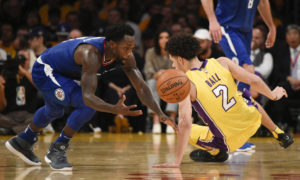 Don’t think we forgot to talk hockey. This is Canada, after all. Of course we had to talk about that Duchene trade, the fate of the Leafs minus Matthews, and which power couple from the south of Florida is taking over the NHL. Seriously Kucherov and Stamkos? 54 points through 16 games? That’s too unreal.

Moving from our favourite amateur sport of college football into it’s professional big brother, we take a look into the fate of the Cowboys minus Zeke, why the NFC has been flipped upside down by Drew Brees, and finish it off with our 3 stars of the week.