Hello and thank you for tuning into Hawk Eyes!

We appreciate you tuning in as we got our first month of university sports talk started.

Our football team came out to a rocking start going 3-1 in the month with victories over Carlton, Queens, and Waterloo and our unfortunate loss against the dreaded Western Mustangs at homecoming. Overall the hawks showed a lot of promise this month with Knevel averaging 300 passing yards a game and the team seemingly picking up right where they left off after last years historic run. The one game that we wanted the most but they we unable to pull out a W for was the “loved” rival that is the Western Mustangs. We can just hope that our season follows a similar path as last years as we also lost to them in the regular season but everyone knows the result of the game the second time around.

Our Baseball team was also off to a tremendous start as they managed to get off to a roaring 10-2 start, with the only two losses coming at the hands of the 1st place Brock Badgers. We featured the likes of some outstanding pitching displays as Christian Hauck really separated himself from the pack with some amazing pitching performances including a no hitter against the Waterloo Warriors. The team has been battling really hard throughout the month and have truly solidified themselves as one of the top teams in the OUA and will be a threat to fear come October.

The Men’s soccer team was on track to get back where they were after having a strong season last year and were up against some tough tasks in September. Having a narrow loss against the likes of Guelph and a couple of hard fought draws against Waterloo and McMaster the Men’s soccer team was not one that would simply roll over. Also featuring some stellar performances from players including the likes of Ryan Mandryk who had a 90 minute 2 save shutout against Algoma helping propel Laurier to one of its two victories against the team, Look for the team to have a strong finish in October

The Woman’s soccer team was out to make a statement this and make a statement they did. After an opening loss to Geulph of only 3-0 the girls’ never looked back for the entirety of September with the exception of a hard fought 1-0 loss against Western.  The girls had a phenomenal September with a glistening record of 5-2-2. The victories included a couple of commanding victories including a 7-1 trouncing of Algoma and a 4-1 beat down of Mcmaster. The girls had incredible depth from top to bottom of the roster and every game it felt like anyone was capable of stepping up and stealing the show, featuring Ashley Almeida in between the pipes she proved to be a pivotal member of the team with some amazing showings including her 4 save shutout against the York lions to help propel the team to a 2-0 victory. 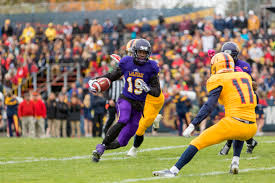