With Homecoming 2017 complete and Steffy Wap back in the home & native land, she and DJ Champagne Tiny had a whole lot to catch up on. You see when Steffy Wap and Champagne Tiny are separated for too long they experience separation anxiety and then won’t stop talking and making weird dance moves when they finally reunite. Here’s the scoop of what’s happened since our last show:

The week was hot. It is still hot. However, the station is no longer boiling. #Grateful

A Not so Humpin’, Hump Day

RIP Hugh Hefner. It was a solid run for 91 years. Could it have been planned that he died on hump day? That is something we will never know.

What we do know is that the PlayBoy founder and Editor- in Chief died at home in his sleep and had planned for his ashes to be interred in the crypt beside the late and beautiful Marylin Monroe. Although criticized in his life for being described as “pimp” he was an advocate for sexual liberation and same-sex marriage which is definitely something worth recognizing.

7 Things We Love About Miley

For the spirit of Miley Cyrus dropping her new album “Younger Now” we decided to list 7 things we love about Miley in honour of her 2008 single, “7 Things:” 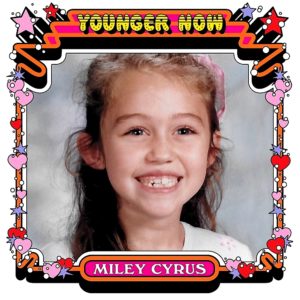 Hold On, We Went Home(coming)

Talk about a beautiful weekend for a football game and school spirit. The sun was beating purple and gold and the temperature was high. Although we did not attend A-team’s concert on Saturday night we heard and saw from various Snapchat stories that River Town Saints absolutely killed it! We did however get a sneak peak of Kira Isabella when she performed at halftime!

Champagne Tiny successfully attended her first football game and was hella confused as to what was going on. Lucky for her, Steffy Wap was able to explain what a field goal was and why Laurier got a first down. Although we lost 29-13, the Golden Hawks battled hard and will continue bringing tenacity and determination into their last 3 games of the regular season. 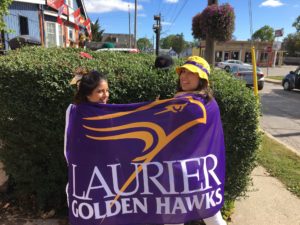 On our show yesterday, we named 3 stars from Saturday’s game:

#3 Star: Levondre Gordon rushed 107 yards on 18 carries. Not only did he rush over 100 yards this game, he as rushed 100 yards in two other games this season! Keep it up!

#2 Star: Our Quarterback, Michael Knevel for hitting double digits and throwing his 10th touchdown of the season!

#1 Star: Kurleigh Gittens Jr. for reaching a U Sports record for catches in a game. 18 receptions and 174 yards … WOWZA!

Too Much (Cranberry) Sauce

Thanksgiving is THIS weekend and according to the BuzzFeed quiz “Which celebrity should you bring to thanksgiving dinner,” Champagne Tiny should bring Drake and Steffy Wap should bring Katy Perry. Apparently when Champagne Tiny brings Drake to dinner, her mom is going to fan girl and repetitively say how Drake is the “best she’s ever had.’ Katy Perry seems like a fitting guest for Steffy Waps’  Big Fat Greek family because after hours at the Steffy Wap household always gets wild!! Katy Perry definitely seems like one to fill up on turkey dinner and then play a rowdy game family charades with Steffy Wap and her cousins.

Try the quiz yourself and tweet us @RLMorningShow was celebrity you should take to Thanksgiving dinner!

There’s Another Baby in the (Kardashian) Oven

As DJ Khaled would say “Anotha One!”

Yes, that is correct, as we learned in Champagne Tiny’s Weekly Relationship Update, the third Kardashian daughter, Khloé, is also pregnant! She is expecting her first child with her Cleveland Cavaliers boyfriend, Tristian Thompson. This is Khloe’s first child and she is very excited to be expecting. This now makes THREE Kardashian sisters pregnant at the same time. If Kris Jenner was worried about KUWTK ratings, she definitely has nothing to worry about for at least nine months.

Well friends, have a wonderful Turkey Day and a relaxing reading week! Listen live when we air at 10am on Monday, October 16th.