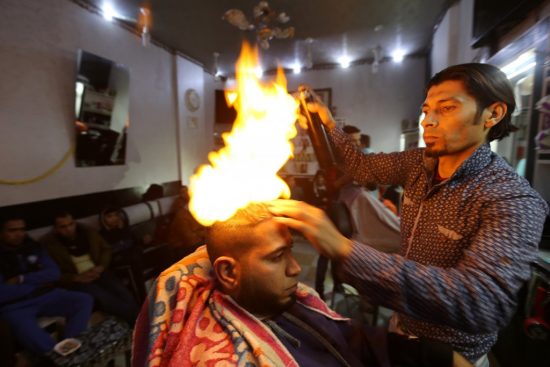 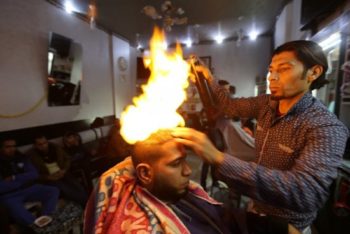 Welcome back to NextWeekNow everybody! I hope you all had a wonderful summer. Mine was pretty good at times. Now that we are all back in classes here at Laurier, everything in my life is a little bit up-in-the-air so to speak, but that is just the way I like it. Anyway, on to the news!

Milan Janosov, a researcher for the Central European University, built a network model of the relationships between the major characters in the show Game of Thrones in an attempt to determine the probability that the character will die during the final seasons of the show.

A 250-metre long fatberg, weighing an estimated 130 tonnes has been found in the sewers of London. Congealed fat, wet wipes, nappies, oil, and condoms are many of the main ingredients in this beautiful mass. The article is quite wonderful as it uses some of the most fascinating size comparison like the phrase “heavy as 11 double decker buses.” (bbc news)

A Barber in Gaza is using a blowtorch to cut the hair of his clients. Ramadan Odwan has said that, because of people’s love of adventure and desire to experience the new and curious, his business has skyrocketed. Thankfully, although he has only been doing this for two months, having his or her heads lit on fire has hurt no one.

There are 60,000 people in Florida right now who are planning on pointing their fans at hurricane Irma to see if they can blow the hurricane away. Although plastic fans might not do much, the human fans gathering together in such a way has shown a huge amount of support and community, a key to getting through wide scale trauma.

New York sheriffs pulled over a man driving a car with no doors, no windshield, no license plates, and an axe buried in the roof. The driver, a twenty-one year old, was so high that he was unable to explain the series of events that led to the car being in this condition.

A Russian woman is suing a credit loan company for compensation after the loan company said that paying off her debt would ‘feel like an orgasm.’ She did not feel like she had had an orgasm and has therefore decided to sue for an estimated $22,000 Canadian.

The fates aligned this week and two separate boys were born in the same Burger King parking lot one day apart. The Denville New Jersey volunteer fire department was proud to report the news on twitter. Both the babies were healthy

In Cuba, twenty-one American citizens have experienced strange attacks that U.S. diplomats have termed ‘health attacks.’ They felt vibrations, heard ringing in their ears and experienced hearing loss, speech problems, and many other symptoms. At first believing it to be sonically based but due to some of the symptoms it sonic attacks cannot be the cause.

In St. Thomas Ontario police entered a house and were hit by butter knives, flying at them due to a booby trap. Though the flying knives did not hurt the officers, it did make them nervous about what the houses owner could possibly be hiding or defending.

Aaron Hughes, a British man in the states on a stag do, is being fined for swimming across the Hoover dam while drunk. This craziest bit is that he is the first person to successfully swim across the dam ever.

Claire Cain Miller of The New York Times has written a very interesting breakdown of women in stock photos over the past ten years. Check it out.

If You Would Take A Man’s Life…:
https://techxplore.com/news/2017-07-game-thrones-network-character-deaths.html

Fans of The Fan Man:
http://www.nydailynews.com/news/national/internet-responds-fla-man-plan-blow-hurricane-irma-article-1.3480937

The Key To Success Is To Not Knowing That What You’re Doing is Impossible:
https://www.theguardian.com/uk-news/2017/sep/11/drunk-briton-fined-after-surviving-hoover-dam-swim

Dammed If You Do:
https://www.theguardian.com/uk-news/2017/sep/11/drunk-briton-fined-after-surviving-hoover-dam-swim