DJ Deej was a lone radio host last night, but she was joined by Keith Diaz for an interview. He is a third year BBA student at Laurier, founder of the Golden Speakers Club, and the brains behind The Story of Now on YouTube. Deej met Keith last September through the WLU Fashion & Lifestyle Society, and they are both modelling in the show again this year.

Deej: Tell us what year and program you’re in.

Keith: I am in third year BBA, you know, doing regular stuff. Actually today, I had Indian food. It was L.I.T.

Deej: Why did you want to start the Golden Speakers Club?

Keith: I’m about to go blast here on Radio Laurier… I hope you don’t mind. It was actually my 19th birthday. I didn’t have the intention of turning up too much, because I had to work the next day, but I had to go out and acknowledge it. You know, use my real I.D. I was at the pre, and I started getting sauced. I told the about ten people there to text everyone and get them to come celebrate with me. As people were coming in, I told them that I wanted to take shots. I did a keg stand, and I kid you not – I closed my eyes, and when I opened them again, I was in the hospital. As I was heading home, I was just thinking to myself, “Is this all I want to be doing in University, or is there going to be more than that to it?” As soon as I got home, I looked at the clubs list. Obviously, there were some that helped with public speaking, but not in the way that I envisioned it. So, I decided to start my own club. They say that some people are more fearful of public speaking than death, and I knew that my purpose was to make young people see it differently. It’s not just a weekly thing that comes out at events on Tuesdays, it becomes a lifestyle for the Golden Speakers.

Deej: What has been your biggest achievement so far, concerning the club?

Keith: Actually, last week was a huge moment. We do Honour Circles at the end of each meeting. Basically, everyone has to give a good vibe word to someone in attendance that week. After that happened, one of the first year students said that since coming to Laurier in September, that night was the first time he felt truly accepted. That was amazing to hear . In general though, we have managed to create such an open space. Some of these people are complete strangers, and share their biggest stories. It reminds me that everyone has a story – everyone that you meet – and that their story is as beautiful and complex as yours. 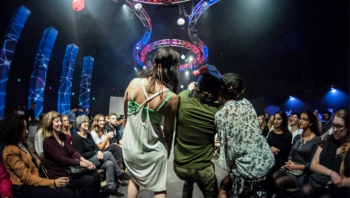 Deej: You’re also a part of the WLUFLS with me. How many years have you been involved, and what keeps bringing you back?

Keith: I have been in the show since first year. Alicia Fisher messaged a bunch on the last day of auditions, so I ran at the opportunity. I’ve been involved ever since. I keep coming back because I love that we work so closely with small businesses. When I wear their clothes, I put myself in the shoes of the owners, and I think of the story behind it.

Deej: What else do you want people to know about the show?

Keith: It is an incredible event for such a good cause, and it is entirely put together by Laurier students. Our peers put so much work into it with all of the art, dance, and fashion. Also, the personalities of each model are showcased heavily, and it’s great to see the final product.

Deej: Lastly, tell the people about the “Yo, Take In…” movement on Snapchat, as well as, “The Story of Now,” on YouTube. What made you want to start those things?

Keith: I made the conscious choice to live in the moment, and both of these things are about the now, the current moment. These have both allowed me to draw attention and thought on the sort of things that we all take for granted. The first series on “The Story of Now” was all about love, and the next series will be about humility. All in all, I can sum it up into two words – GOOD VIBES.

To learn more about Golden Speakers Club, check them out on Facebook by clicking here.

To follow the “Yo, Take In…” movement, add Keith on Snapchat. His username is keithdeezy. Good vibes daily.

To learn more about the WLU Fashion & Lifestyle Society, click here. This year’s show is titled Answer To Cancer: A Red Carpet Affair and is taking place on Sunday, March 20 at 7 p.m. Doors are at 6:30 p.m. Tickets are $20 and can be purchased from a model, on campus in the concourse, or at the door. There will be a silent auction, as well. All of the proceeds go directly to the Canadian Cancer Society.

Next week, DJ Stretch from Week 07 will be making his official debut on Radio Laurier as the newest co-host of After Class, with DJ Deej and DJ S-Goods. We are happy to have him on the team.