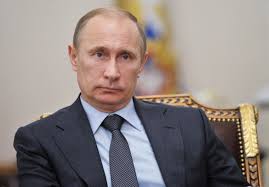 Islamic state militants have accepted a pledge of allegiance by the Nigerian grown Boko Haram extremist group, a spokesman for the Islamic State Movement said Thursday. The pledge of allegiance comes as both movements face unceasing pressure from the militaries in the region.  Boko Haram is widely perceived to be a more active threat to the region, the move could potentially signal increased incidents of violence.

The Kremlin says Russian President Vladimir Putin, who has been out of public view for more than a week, is to meet on Monday with the President of Kyrgyzstan. A growing level of speculation has begun to mount about the Russian Leader`s health. Putin postponed a meeting with the leaders of Kazakhstan and Belarus earlier this week, which fueled the speculation that he was ill. A Spokesman has said, “Putin`s health is really perfect.” This week`s absence of the Russian President from the public eye is only the most recent incident in a string of unusual public disappearances.

A Canadian man who is reportedly wanted in the United States on fraud and racketeering charges is under arrest in Thailand. The Milwaukee Journal identified him as Antonius Ceulen. A Spokesperson for The US Department of Foreign Affairs refused to identify the man, but confirmed an arrest. It`s unclear where in Canada he`s from, however The Bangkok Post stated that he arrived in Thailand sometime between 2000 and 2011.

NDP MPP Cheri DiNovo is seeking a ban on conversion therapy in Ontario. Conversion Therapy is the controversial practice of changing or directing a patient`s sexual orientation or gender identity. The practice has been condemned by numerous Psychiatric Associations, which deem it psychologically damaging. The Practice has also been in numerous US States, however Ontario is one of the few jurisdictions in North America to continue to allow the practice. The therapy is also eligible to be billed to OHIP. DiNovo said, “this is about children and about intrinsically who you are. Children who come forth to tell adults who they are and adults who say it`s wrong and it needs to be fixed-that`s more than sad. It`s abusive, and it needs to be stopped.”