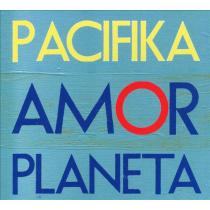 Earth; it’s our most favorite planet to live on in the entire universe (so far). But, with 7 billion bodies, life here can get a little intense. Music provides solace and sanctuary. No wonder so many of us orbit in our own little worlds plugged into a private planetary soundtrack. Amor Planeta, Pacifika’s fourth album, third on the tastemaker Six Degrees label, is a love letter tucked in a sonic envelope of such high definition and high fidelity it will steam up your Beats by Dre headphones. “We took our damn sweet time making this album and it was worth it,” explains guitarist/composer/sound designer, Adam Popowitz, one third of the Pacifika trio. It’s been four years since Supermagique, their last, studio-intensive album. “This time we came from a more live perspective, jamming out the tunes and then working on melodies and lyrics. Then when we started rehearsing them, we all had big smiles on our faces because these songs sound great live!” Along with Adam, at the core of the Latin chill west coast phenom is Peruvian-Canadian singer/poet, Silvana Kane and Bajan-Canadian bassist, drummer, Toby Peter. Another prominent voice on Amor Planeta is the cool horn of TANGA’s Malcolm Aiken whom Adam calls “an honorary member of Pacifika.” “We met about 2 and half years a go and instantly formed a brotherhood. We’re in constant communication and are partners on various projects with his band as well.” Pacifika’s siren and poet, Silvana explores Amor (love) in all its machinations on the new album, breathily floating in conversation with Aiken’s almost Nordic jazz/Miles Davis languid trumpet lines. Meanwhile way, way down at the molten core of Amor Planeta, Adam’s electric guitar textures roil and rumble with Toby’s drum and bass grooves, tropical dropbeats and polyrhythms. The flawless and multi-dimensional production is so gloriously spacious it becomes a full body embrace. Focus tracks? There’s too much to love on this Planeta but Yo Te Amo, Sal y Brisa and Bring It are instant infatuations.