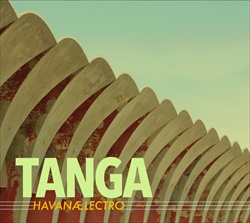 Vancouver is home to a vital Latin music scene. Afro-Cuban rhythms especially have been well represented by an established community of phenomenal players, inter-connecting through a revolving roster of ensembles. But, with the release of their second album, Havanaelectro, TANGA have created the most relevant, most refreshingly contemporary expression of Latin groove music so far, not just in the Pacific Northwest but in the scope of the global genre. That should come as no surprise because it seems most anybody who’s anybody in those circles was recruited in the making of Havanaelectro, which was recorded in both Havana and Vancity. Their manifesto sums up nicely, “TANGA is a west coast collective of musicians, DJs and sound creators dedicated to cross-cultural collaboration and discovering new manifestations of groove.” What’s to love about this record is what makes global music so visionary and forward-thinking. It’s something TANGA refers to as ‘cross-seeding’. Not that collaborations are uncommon across the music spectrum, but global musicians tend to draw from much further a field to create surprising soundscapes, which inherently reflect the mosaic of our urban environment. At the centre of the collective is trumpeter Malcolm Aiken, a staple in Vancouver’s jazz, Latin and pop circles, leader of Mazacote, a New York-savvy style salsa band, and co-founder of Treble 5 Records, a Vancouver-based indie world label. He’s shared the stage with the greatest names in Latin music, explaining how he probably had guys like Grammy-winning trombone man, Jimmy Bosch in his phone favorites for this project. In Havana he recruited Cuban sextet Tante de los Guaracheros for authentic underpinnings. Back inCanada, versatile vocal talents Jesus El Niño from Montreal and David Lopez from Aiken’s own Mazacote add their chops on top. But, the coolest contributions come from more unexpected corners; Pacifika’s Silvana Kane adds her siren’s coos and whispers to ‘Mirala’; ambient and sensual, it’s a captivating moment punctuated by Aiken’s reverb-drenched horn and the Cuban chanting. Another standout, ‘Toto’s Tumbao’ showcases another major upcoming Vancouver talent, award-winning rapper, Kyprios. And, Vancity’s notorious beat poet, C.R. Avery, trades words with El Chulo and Danny Flow in the smoky chill of ‘Dancehall Mambo’. The international stars shine on the opener and video single ‘Dejala’, featuring Jimmy Bosch and Tanta de los Guaracheros. Compelling sound bytes string together the tracks, adding to the travelogue feel of a disc that spans distance and time, and ultimately leads you to what’s next.