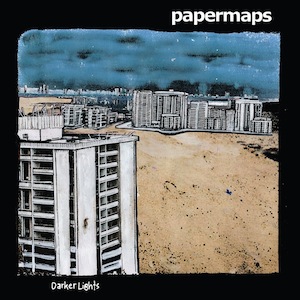 Formally known as Ex~PO, the Toronto native band Papermaps is out with their latest album, Darker Lights. It opens up with the hypnotic track titled “Shadow Theatre”, a type of tune you want to listen to while looking out the car window on a long drive. The song keeps the pleasing melody while the bands front-man and producer, Dean Marino provides the hook of the song, serenading the listener with cascading lyrics. A strong open, “Shadow Theatre”, ‘sets the stage’ for the rest of the album.

Like the title suggests, Darker Lights also provides a darker and more guitar driven sound. Including some heavier tracks like “The Hedonist”, and “Nobody Gets It”. The band leans toward a new direction, stemming away from their previous pop sounding songs to a sound more closely compared to Radiohead or Death Cab for Cutie. However some tracks like “One by One” seem more like pointless fillers than preferred choices for the album, and ultimately leave things to be desired in comparison to the rest of the album.

While Darker Lights may not supersede their previous collection titled Inferior Ghost, it does provide listeners and fans alike the familiar multi-tracked vocals and some standout singles like the previously mentioned “Shadow Theatre” and “Nobody Gets It”.

Overall Papermaps’ new sound delivers, and it’s recommended everyone check them out with the release of Darker Lights on October 8th, 2013.