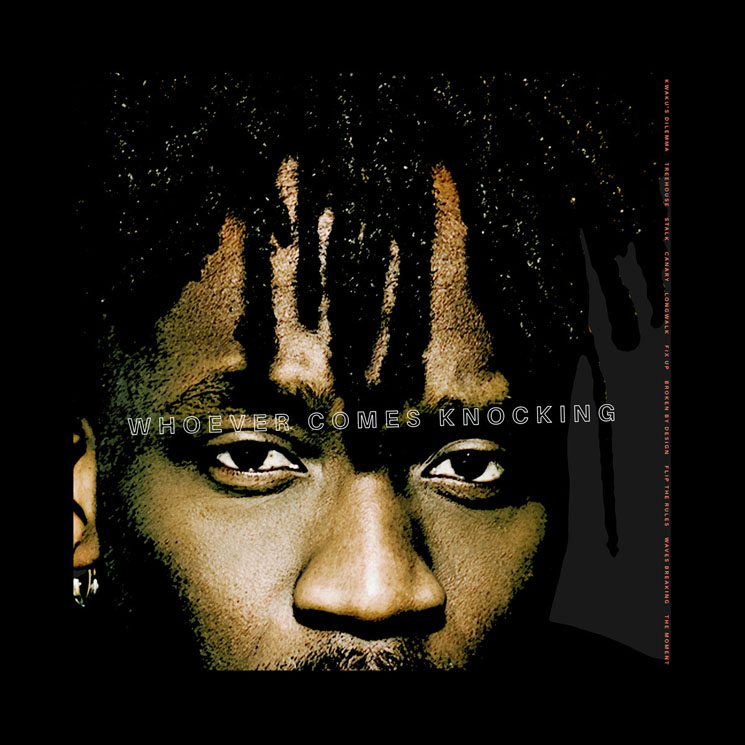 Being now well established, Ghanaian/Canadian artist Kae Sun is back with his third studio album “Whoever Comes Knocking”. Previous to this album, Kae Sun had released two albums, “Lion on a Leash” and “Afriyie”, and various Eps but the albums are the major highlights. They are a great mix of R&B and singer/songwriter with his various instrumentation and soft yet powerful vocals, and he developed a very distinct sound of his own. One that he made a name for himself with and it was so capturing and trance enduing, making you just want to listen through his music. We see on “Whoever Comes Knocking” a shift in his sound to something more contemporary and modern.

You get a taste of it at the beginning of the record with the into track “Treehouse”, it starts out with these bouncy electronics and very sincere lyrical and vocal performance moving to more passionate parts adding some fading guitars which was a nice touch. There is a clear sign of the previous sounds Kae Sun stuck to, but then it moves to a heavy bass section with vocal snip bits which marks a shift in the sound, but on this song in particular he uses it well Staying steady throughout the song.

The album progresses with songs that seem more attributed to more contemporary R&B, which you hear a lot on this album and it fluctuates between having a strong meaningful sound and one that’s a little more lack luster. Tracks like “Stalk” and “Fix Up (feat. Ariane Moffatt)” both have good thematic concept and vocal performance that Kae Sun shows in all of his songs, but they lack by coming together with mediocre instrumentation and execution, with only Stalk sticking out with it being a more groovier song. On the other hand, the tracks “Carary” and “Longwalk” go in the other direction, having the same great vocal performance but with a more passionate flare and being mixed with deep and driving instruments. On Canary, there being striking piano chords playing as well as good sounding chorus melody. Then on Longwalk a droning bass moving the song forward while being accompanied by many percussive parts and harmonies that seem to make it one of the most passionate song on the album. The only problem being at parts there being a drum machine playing which really takes away from the focus and sound of the song.

Now the track “Broken by Design” marks point in the record where it takes a turn for the better. This song in particular because it uses more electronic and synth that call back to an 80s sound, but it is executed in such a pleasant great sound. In addition, having a moving message throughout the song and funky bass line at the end makes it a highlight of the record and better used of new sounds.

The album then progresses more where it still contains a little bit of the new and more electronic sounds but contains more of his older more R&B and singer/songwriter smooth sounds and instrumentations and has some of the best songs of the album. The track “Flip the Rules” is a very fun and funky song using a great drum beat and bass to push a strong rhythm and a smartly used synth to push the melody of the song.  Moving to “Breaking” a track that captures the emotion that Kae Sun can express. Sounds of acoustic guitars and atmospheric electric guitars along with a strong rhythm, but mostly his vocals that stay consistent and soothing while giving a great performance. The last track “The Moment” acts as primarily a closing to the album but it does that in a nice way with a pleasant sounding instrumental start to a soulful vocal ending.

Whoever Comes Knocking overall is a pretty good album that brings in a shifted sound by Kae Sun that doesn’t play up to being as great as the sound son his previous records. The first half of the album you really hear this new sound and it is executed pretty well but there are only a few highlights and the rest sounding more mediocre. Then towards the end the old sound comes back and leading to the best tracks on the album. Kae Sun is such a conceptual and poet artist and he proves to a great artist, but this album, while still being a good album one, doesn’t lead up to his full potential but it still culminates to a good listen.