Welcome back everyone! Hope reading week was full of doing nothing! I haven’t been around for two weeks or so, I had to cancel the week prior to last as I was really stressed out and had a lot of work to do. The next two weeks will follow a similar pattern, but hopefully I can pull through…

Not too much going on this week, other than Smashing Pumpkins tickets not selling very well, and all Radiohead tickets for Toronto selling out in minutes. 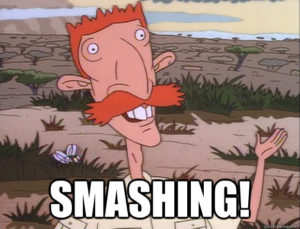 blink-182 are an American pop/punk band formed in Poway, California in 1992. Originally known as “blink”, the band was sued after the release of their first album by an Irish rock band with the same name on the same label. The band then changed their name to add 182 on the end, and despite all theories and conspiracies, there is literally no meaning to the name.

The group, with drummer Scott Raynor, guitarist Tom Delonge, and bassist Mark Hoppus, released their first demos in 1993 called Flyswatter. In 1994 the band released their first album, Buddha, which was distributed locally. The band were a hit among the skateboarding population, and began to develop a reputation. In 1995 they actually got studio time, reworked some songs, and came out with Cheshire Cat. The songs M+M’s, Carousel, and Wasting Time were some of the biggest on the album.

The band toured extensively, and in 1997 released their followup album, Dude Ranch. This album had the band’s two biggest releases, Dammit and Josie. These songs would catch the attention of major labels, as well as those coming off of the Grunge era. It had a raw punk sound, but with a poppy twist.

While touring to support the album, drummer Raynor jumped off of a high building and ended up breaking both of his heels, leaving him unable to play at times. Raynor was also pissed off that Mark and Tom had decided to “sell out” when signing with MCA Records. He saw it as a very un-punk thing to do, and resented the two of them for it

At another point in the tour, Raynor also had to depart back home to take care of some family issues. Blink then asked their supporting act if they could borrow their drummer for that day’s show, and possibly more of their tour. The Aquabats complied, and drummer Travis Barker reportedly learned 20 blink-182 songs in 45 minutes.

By the time Raynor was able to come back, blink had decided that his insubordinate behavior, combined with his recent alcoholism were not going to be tolerated. Raynor was then booted from the band, and Barker would become the touring drummer until he was signed on permanently after the band’s 1999 release.

Enema of the State is considered to be the pinnacle pop/punk album, and there is no doubt that many modern pop/punk acts would not exist if not for this album. What’s My Age Again, All The Small Things, and Adam’s Song are just some of the great hits from that album, and the band took off.

2001 saw their followup album, Take Off Your Pants and Jacket, with a similar approach, but with some darker songs to boot. The Rock Show, First Date, and Stay Together for the Kids are among the many amazing songs on that album; but for Tom Delonge, he needed something darker and more raw. Sure T.O.Y.P.A.J. was a different approach for blink, but it was still too bright and poppy.

Tom then created Box Car Racer with Travis Barker and two other friends, which was a dark, punk sort of album. Mark was pretty pissed about this, and these tensions definitely carried over for years; but in 2003, the band got really experimental with their self-titled album, and is arguably one of their best albums among fans. Feeling This, Violence, Obvious, I Miss You; just some of the amazing songs from this album.

Tensions continued to boil over however, and by early 2005, the band had gone on an “indefinite hiatus”. Only after four years would the band re-unite, following Travis Barker’s plane crash in 2008. The band would tour some classic songs until the release of Neighborhoods in 2011. It was a departure from their previous work, and showed a more mature outlook on life and its problems. Despite this, many fans critique it as one of their worst albums, due to the production being done separately by each member

The Dogs Eating Dogs EP was released in late 2012, and was a more electronic and mature album, which many fans thought would be the new direction of the band. However, in 2015, Tom Delonge once more departed the band in order to pursue his other projects in film, writing, and in more work with his other band, Angels and Airwaves.

blink then replaced Tom with Matt Skiba of Alkaline Trio for a few shows, until making him a permanent member of the band. This would be followed up by the band’s next album in 2016, called California.

Our Lady Peace this week with 4am.

Thanks for another great week, cheers.