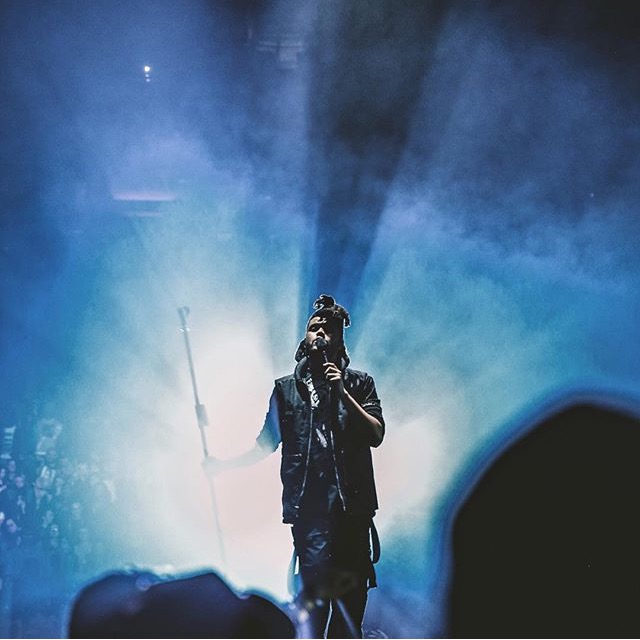 The Weeknd kicked off his North American Madness Fall Tour in Toronto on Tuesday, November 3rd.

It’s been about three years since Scarborough native Abel Tesfaye, better known as The Weeknd, released his three-album debut called Trilogy. Now three albums deep and seeing the singer reigning as a star, being at the opening night of his fall tour was a celebration of his career so far.

Opening the night in the Air Canada Centre, Travis Scott brought heavy hip-hop beats hyping up the whole arena, and California singer Banks chilled out the vibe before The Weeknd made his debut.

The singer had a pretty simple stage look at first, but as soon as the show began the audience was immersed into a show of lights and graphics. He pretty much played his album Beauty Behind The Madness in order for the first couple of songs, as he rose above the audience behind a scrim that projected graphics all night. He then continued into some of his older hits like “High For This” and even performing Drake’s “Crew Love”. As the night rolled on, hit after hit, The Weeknd created a dynamic show by simply giving it his all and paying a lot of credit to his band. The night concluded with “The Hills” where he almost set the ACC on fire as flames ignited the stage to the powerful beat.

As someone who has been to a lot of concerts, ranging from pop divas to hip-hop kings, The Weeknd’s was unlike anything I have seen before. A month after seeing Madonna on her Rebel Heart tour, I felt I had seen it all. Then The Weeknd proved me wrong. I had never seen an artist bring a show of passion and personality to life with lighting like he did. There were three sets of geometrically dynamic lights that hovered above the stage, and he was backed by sprawled along the back, he actually lit up the Air Canada Centre. He managed to express the madness behind his hit album and past music through lighting fixtures unlike any I had seen until that night.

The Scarborough kid also gave a lot of credit to his fans and his home. People commonly refer to Drake as the “6God” rightfully, but The Weeknd has established a face to go right beside Drake as equal rulers. He never failed to keep in touch with fans and express his gratitude to them, some people even felt the love to rush on stage to celebrate the night with him, only to be tackled and dragged by security.

The Weeknd has set the bar high for R&B artists. He has tugged on the dark side of  life – a recent Rolling Stone cover sub-headed the cover story with “sex, drugs, and R&B” – and has created a spot for himself and new R&B artists all over the charts. This tour substantiates The Weeknd’s force in the music business as both thoughtful, provocative, and creative. Welcome to The Madness Tour.