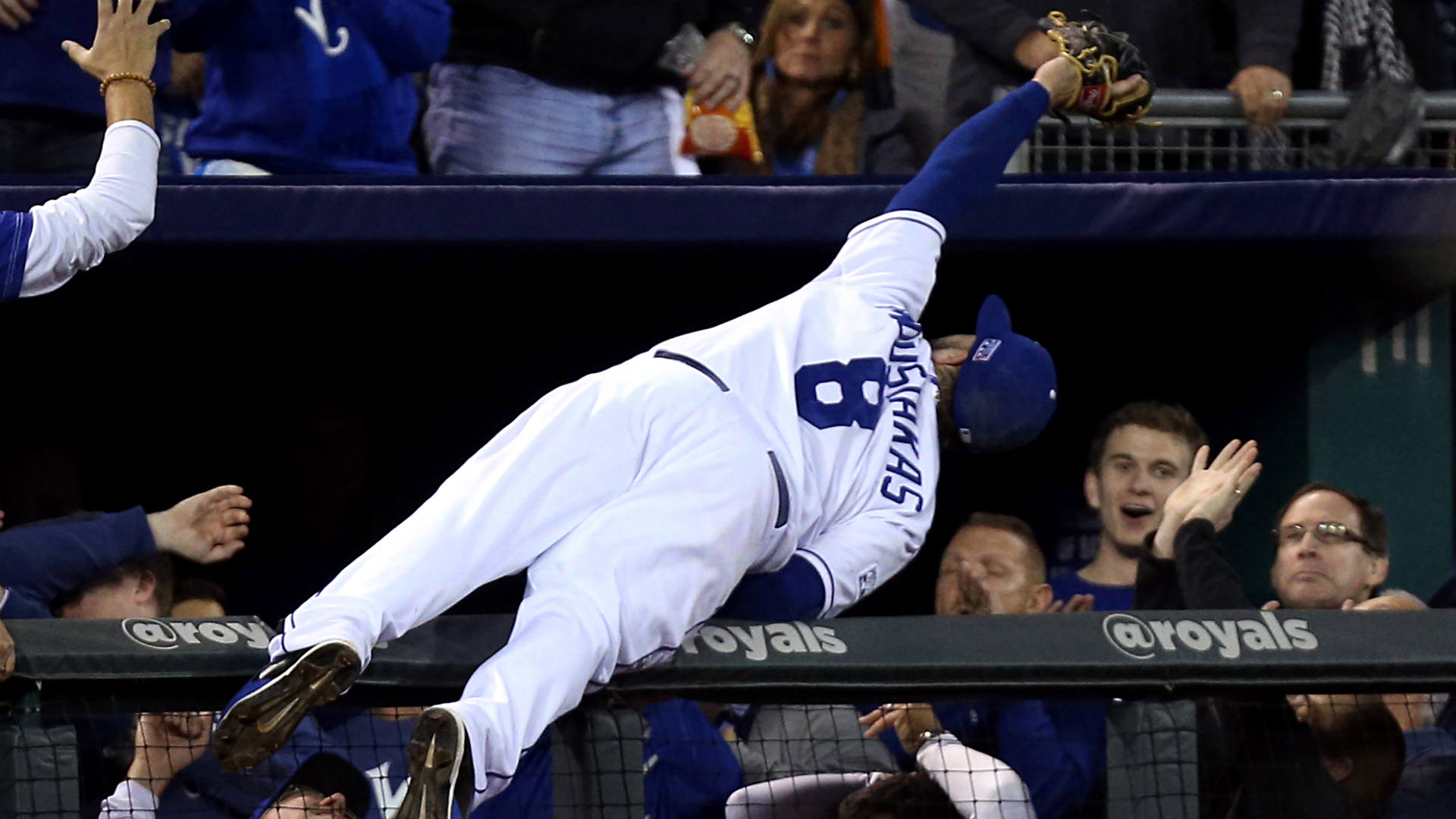 Just because it’s Laurier’s fall Reading Week doesn’t mean we don’t have all of you sports fans covered. We aren’t on the air this week, but here’s what you could’ve expected from our show! In case you missed last week’s show check it out here: http://www.mediafire.com/listen/f3oklqvficcml3y/Upon_Further_Review_07-10-14.mp3 And as always let us know what you think on Twitter. Follow us @UFR_Radio!

The MLB playoffs continue to surprise and excite us

That’s right; the clock still has not struck midnight on the Cinderella-esque Kansas City Royals. Hell, they haven’t even lost a game yet, winning in dramatic fashion in game one of the American League Championship Series against the Baltimore Orioles with three runs in the ninth inning to win 8-6 and two runs in the ninth the following night to win 6-4 en route to a sweep of the O’s.  What is there to be said, really; everything is going their way. Mike Moustakas has gone from zero to hero, winning games and making huge catches. In Tuesday night’s game he had a Jeter-esque diving catch in the stands and has hit .280 with four home runs. This team is very much like the 2012 Los Angeles Kings who were a low seed in the tough Western Conference and barely broke a sweat on their way to the Stanley Cup victory. The Royals have all the ingredients for a championship going right now: timely hitting, great defense and good pitching coupled with an incredibly dominant back-end of the bullpen. I don’t know about Dillon, but I’ve jumped on the Royals’ bandwagon and I’m gonna ride it all the way to the World Series. I ‘m hoping for a battle of Missouri between the St. Louis Cardinals and Kansas City Royals, but we’ll see.

Speaking of the National League… the National League Championship Series has had its fair share of dramatic moments. Kolten Wong came out of nowhere to crush a walk-off homer for the Cards in game two, but they’re in tough down 2-1 in San Francisco. And I say in tough because of Ryan Vogelsong taking to the mound on Wednesday. I don’t think many people really think about him, but he’s dominated in the playoffs. The right-hander has not allowed more than one run in his first five playoff starts (only pitcher in 111 years to do that) and the Giants have won in each of those five starts. Good luck to your Cardinals, Dillon.

So much for the demise of the Cowboys that I ever-so confidently predicted in our first UFR show of the year. After being dismantled by the 49ers in week one, the Cowboys have won five straight and in their biggest statement game of the year, beat the 12th Man and the Seattle Seahawks 30-23 on a late drive highlighted by Demarco Murray, who continues to run all over teams’ defenses, racking up another 115 yards. The Eagles kept pace in the NFC East with a crushing win against the New York Giants (that both Dillon and I got wrong on last week’s show). Philadelphia’s defense continues to impress, although Eli wasn’t looking like the rejuvenated QB of the past few games. And then there’s Peyton Manning, who continues to nonchalantly write his name in the record books as the league’s career passing touchdowns leader. Manning had another three TDs in a 31-17 victory against the New York Jets and now needs only three TDs to have the most ever.

We’re a week into the NHL season and after the sky began to fall in Leafland (Kyle: To my delight), they’ve seemed to right the ship a bit with a 6-3 victory against the New York Rangers and a 3-2 OT victory against the Colorado Avalanche. Crosby is showing why he’s the MVP (Kyle: And best player in the league) with six points in two games (as of writing). Rick Nash is having a major resurgence, leading all skaters with six goals and seven points after the first week, but otherwise it’s the usual suspects. The Devils and Islanders have to be the biggest surprises so far in 2014, leading the Eastern Conference with 3-0–0 records.

Basketball’s almost back! But is the NBA season too long?

So, the latest out of the NBA once again has to do with the length of the NBA season. All that needs to be said on this matter: The season will not be shortened. The league, owners, players want money and you better believe that the parties involved don’t want revenue earned cut down by six home games if they were to drop the season’s games down to 70. Personally, I wouldn’t mind that at all, but it’s not happening anytime soon. One thing they’re going to try on Sunday, October 19 is a 44-minute game; so 11 minutes per quarter instead of 12. Honestly, I don’t know how much of a difference that will really make, other than make the game go quicker for the fans. With that in mind, cut it to an even 10; when the final minute of an NBA game takes at least 10 minutes, saving eight minutes a game would be appreciated. That sums up most of this week’s news in the world of sports. Catch you all back on the air at 6:00 PM on Wednesday, October 22!