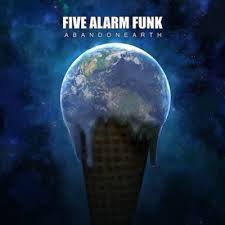 Not coming soon to a theatre near you! Five Alarm Funk create the soundtrack to a summer blockbuster you’ll only ever see in your mind. But, thanks to the boundless imagination of the ten-piece juggernaut and some monster audio production, this sci-fi apocalyptic joy ride can be asMichael Bay big as you want. The premise for Abandon Earth? A giant robot breaks out of the earth’s crust causing global cataclysms in hi def fidelity. “We wanted to make the music tell a story, to create images in people’s heads.”, explains singer/drummer/frontman Tayo Branston. “Once the whole concept of the album was formed we saw the different parts that we had to write music for.” Yes, you heard right; in an era of digital streaming, singles downloads and all but anonymous music, Five Alarm Funk have created a ‘concept album’! Something special would seem be in order, after all, it is their signature release being the fifth. And, only a band as tantric-tight and fibrillating with pent-up energy could capture in a recording those different soundtrack parts Brantson mentions. There are high-octane chase sequences fueled by the battery of percussionists (the band has four that pummel and bob as a single organism, if you’ve had the luck to see them live), real 60s-style spy thriller stuff. Abandon Earth is planet-wide in its destructive force, so the band seamlessly weaves in and out of Afrobeat, Latin funk and even shots of Balkan brass as the mayhem spreads around Mother Earth. Giant robots imply heft and metal, so don’t think for a minute Abandon Earth is some folkloric romp around exotic locales. The guitars are massive on this recording (engineered at the Farm Studios in Vancouver, hallowed ground that once contained the legendary Little Mountain Sound), and produced by master knob-twiddler Ben Kaplan who makes magic here by conjuring the sonic equivalent of nuclear-strength explosions. It’s hard for the ear to figure out what instruments and/or effects punctuate these blasts but they are truly awe-inspiring. Credit also has to be given to Noah Stacey for the artwork. Through all five albums, Five Alarm Funk have given us cover graphics that are funny, ironic and instantly t-shirt ready, but Abandon Earth’s ice cream earth melting over a sugar cone is the best yet. I take a large, boys.