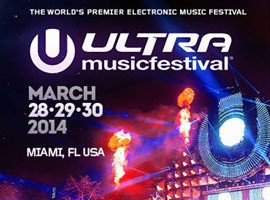 This week I covered some EDM beats that are to be heard at the upcoming Ultra Music Festival that is happening in Miami, US within 9 days. This year’s festival is held on March 28, 29, 30. Although I wish I could really attend and get away from this harsh winter, I unfortunately am not. So instead, I figured I would blare some dance tunes over Radio Laurier airwaves instead in hopes that it brings some music festival nostalgia to good old Waterloo. Tickets are 92% sold out so there is still a chance you can attend if you really want to be spontaneous. Tonight’s show featured a bunch of remix’s, cause you know, I’m trying to hit two birds with one stone with my lineup by featuring as many artists as I can in my one hour window.

I hope you all enjoyed tonight’s show. Check out www.ultramusicfestival.com for more information on tickets and other happenings around the globe!