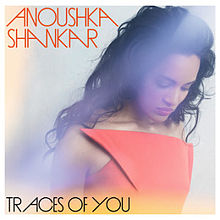 No man is an island. Neither is any performance artist, no matter how iconoclastic the ‘solo’ act. Unlike painting or sculpture, music thrives on collaboration and the critical, objective ear of the producer can make or break any project. Ravi Shankar’s surviving sitar protégé and super-talented daughter, Anoushka has a knack for picking producer/collaborators for her recordings, which makes them stand outs; defying genre. 2007’s sublime ‘Breathe Underwater’ paired Anoushka with tablatronics pioneer, Karsh Kale for a delicate but programmed beat-laden exploration of contemporary Indian music. 2011’s ‘Traveller’ was to be Anoushka’s first recording on the prestigious Deutsche Grammophon label. The concept for that disc was not a new idea but tantalizing in its possibility and effect. Working with Javier Limón, a veteran of fine flamenco recordings, Shankar set out to follow the ties that many suggest bind the people of the Indian subcontinent with the people of the Iberian Peninsula. Squeaking in under the wire at the close of 2013, Anouskha releases her seventh album for sitar called ‘Traces Of You’; the title an obvious reference to her beloved pandit and departed father, Ravi Shankar. For this deeply personal work, Anoushka found a collaborator in Nitin Sawhney, another pioneer of South Asian music modernity, who is in huge demand as a film scorer and has worked with the biggest names in the industry like Sting, Natacha Atlas, Nusrat Fateh Ali Khan, Jeff Beck, Julian Lloyd Webber and Paul McCartney. Nitin Sawhney’s greatest gift to contemporary worldbeat is his unique ability to use electronics in subtle, supportive ways to draw out the acoustic instrumentation rather than providing counterpoint. Traces Of You also uses the new ‘Hang’ percussion instrument. Invented by a Swiss couple in 2000, the Hang has extraordinary pure, bell-like tones that evoke nature and spirituality. But, the star of the show is Anoushka’s sitar. Traces Of You is required listening for any fan of the instrument. Not only are the compositions gorgeous, fresh and accessible, the recording of the instrument itself is superb. These ears have never heard the sitar with more clarity, more dimension and oh, the glorious overtones! Anoushka has found her own voice from under the formidable shadow of her father, and Traces Of You is a magnificent tribute. Anoushka’s half-sister, Norah Jones contributes her voice to three tracks including the title. A music video for the song was directed by Anoushka’s husband, British film director, Joe Wright whose credits include Pride & Prejudice, Atonement and Anna Karenina.