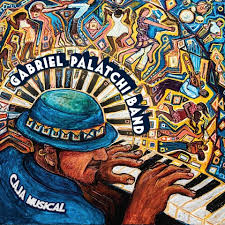 West coast jazz is like west coast fashion, it’s not as edgy as New York, but it’s not as uptight either. There’s a casual, funky vibe on the best coast that has left its mark on global music expressions as well. Big Latin jazz bands are abundant from Vancouver to San Diego and they predominantly bring a light, breezy air to their arrangements and compositions. Gabriel Palatchi comes from another coast entirely, born in Buenos Aires, Argentina, but on his new recording adventure called Caja Musical or ‘Music Box’ his band displays a blend of nonchalance and virtuosity that would not be out of place out west. This piano man loves to travel. In 2008 he went to Cuba to study with the renowned ‘Chucho’ Valdez. Today, he lives tri-coastal, dividing his time between Canada, Mexico and Argentina which make go a long way in explaining the extensive breadth of repertoire. His new ‘Music Box’ flips seamlessly from genre to genre. Over a foundation of Latin Jazz, Palatchi and his crack band of 20 hand-picked musicians work in elements of tango, Balkan, samba, salsa funk, Milonga and even klezmer. Palatchi also doesn’t restrict himself to the acoustic 88s. He’s equally adept and comfortable laying down clavinet, B3 groove or synth signature as the mood strikes. The portmanteau titles of Caja Musical’s ten tracks emphasize Palatchi’s proficiency at mix and matching. Among my favorites are Argentimba, Funkeando and the very clever Klezmertango. The package was recorded in Buenos Aires, which leads me to wonder if in the Southern Hemisphere the west coast is not on the left.