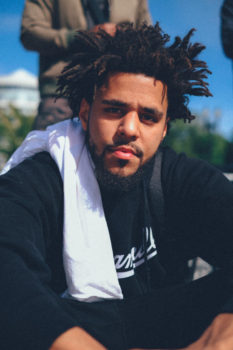 It’s Going to be a Cole Winter

King Cole has done is again!!! Damnnnn J. Cole back again with another Album. The is titled For Your Eyes Only. After a two-year hiatus, it is safe to say the J. Cole is back again to cause a lot of rumble with his next album. The album is set to release on December 9, 2016. Cole released a documentary that was exclusively on Tidal showing the process of a day in his life and how a regular day in the studio is like for him. In the documentary, Cole released two videos, “False Prophets” and “Everybody Dies”. The records have caused quite a stir in typical Cole fashion as he sits back and watch the reactions. The track list for the upcoming album was released last night with ten songs and there were no features on the album. Just another album to go platinum with without any features. Cole has proven over the years that he is lyrical and is not to be messed with on the mic. As the days goes by the anticipation for the album grows. Cole brings the style of old school hip hop to the new school crowd.

Childish Gambino dropped a brand new album this week, but unfortunately thanks to J. Cole, it has been slightly over shadowed. Gambino’s latest effort Awaken, My Love has been receiving mixed reviews. First and foremost, this is not a traditional Hip-Hop album,  which has caught quite a few people off guard. If you can manage to get over the fact there is no “single” or “bars”, it’s a bit easier to digest. The sound of the 11 track album has been described by fans as “1970’s heroin funk” (whatever that means), unapologetic acid-soul (again whatever that means), and Gambinos transition from Childish to Adultish Gambino. While artistic progression is always the moniker of a pure artist, this album is admittedly more difficult to digest than his previous works, and requires a more complex appreciation. Usually HotNewHipHop.com‘s comment section is nothing more than trolls and jokes however a user explained the our feelings of this album perfectly, “Album is not for everybody thats obvious. Some will f*** with it and some won’t. Me personally it’s not what I was hoping for but I like it for what it is.”

All I Know – The Weeknd Ft. Future