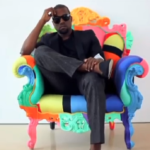 DJ Deej and DJ Stretch took to the air waves for the second-last time this year, without S-Goods. She will be back on April 5th for the final show as a full squad. A lot happened in music this week, including Kanye West finally releasing "Famous" as a single on a platforms other than Tidal. The Louis Vuitton Don released a mastered version of the track on Spotify and Apple … END_OF_DOCUMENT_TOKEN_TO_BE_REPLACED